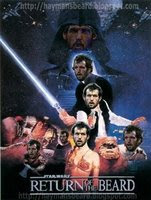 Not only is Europe going to be inundated with thousands of insufferably gloating Kiwis next month, it also looks as if a large majority of them will be sporting facial hair.
"Hayman's Beard," a group of nutters from The Land of the Long White Cloud who have (successfully it seems) been campaigning for the iconic All Black tight head prop Carl Hayman to re-grow his beard, have now switched the focus of their campaign and made a call for national unity, urging all New Zealanders to grow beards between now and the World Cup to show their support.
"We are calling on all New Zealanders to abstain from shaving from now until the end of the All Blacks World Cup campaign, which we of course hope will end with victory in the final on October 20th," said a Hayman's Beard spokesperson.
"The key is for everyone to cease shaving immediately, so that the country can present a hairy front as a sign of our loyalty and support."
So, assuming that the New Zealand nation gets behind this campaign, we can expect France to be invaded this autumn by hoardes of overly hirsute Kiwi rugby supporters - and that'll just be the women :).
Posted by Total Flanker at 08:46