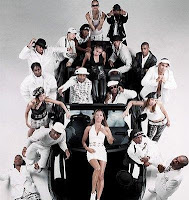 It's official. Rugby is bad.

The RFU's recruitment campaign is beginning to bear some bizarre fruit with the apparent recruitment of So Solid Crew member MC Neutrino (aka Mark Osei-tutu) by Battersea rugby club London Cornish.
The 25 year old rapper (now I really do sound like my Dad), said he started getting involved with rugby because he was bored with football and working out in the gym. Club coaches now hope he might inspire South London kids to go to training and learn about the game.
"I'd watched rugby on TV growing up" he said. "We didn't have the chance to play it at school, but I'd always been curious about getting involved.
"I speak to a lot of young kids round the housing estates and when I say I play rugby they're a bit surprised...I know rugby is perceived as a white, middle-class sport and maybe it needs to rid itself of that. If I can do anything to help do that it's great.
"For whatever reason, rugby players have a reputation for being posh but I have fitted

right in," he said.
"When I joined, I thought I would be the one standing in the corner by myself but it is not like that at all. I love the camaraderie - everyone at the club has really embraced me."
London Cornish first-team player Will Ho (which just has to be a made up name) allegedly said: "He's pretty big and quick, but you can tell he hasn't been playing the game for long. He's only been training with us since March, but he hasn't missed a session. He has improved a hell of a lot and he's started to get more involved in the games he's playing. The boys still give him a bit of banter for his flash car and the chain, but it's all a bit of fun."
The even more bizarrely named Dickon Moon, the London Cornish Director of Rugby added:
"He is a powerful unit and is incredibly keen to learn. He has attended every session since he started and our only problem now is to work out where to play him.
"We are hoping that his involvement may inspire other potential players from communities not normally associated with rugby union to get involved with their local clubs."
The 30-strong So Solid Crew had a chart topper in 2001 with "21 Seconds" and as one half of Oxide and Neutrino, Mark had another No 1 single with "Bound 4 Da Reload" whose opening lyrics are:

Who knows, it might just catch on but it's hardly Swing Low Sweet Chariots is it?
Posted by Total Flanker at 00:24

I think that's great news - why can't he join in and enjoy rugby. your post kinda sounds like your taking the piss out of him. Good luck i say