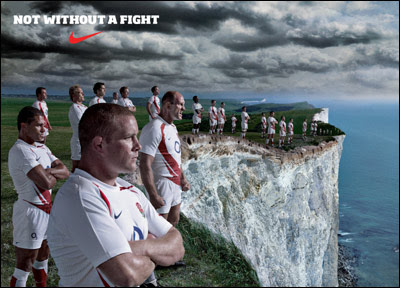 So, against all the odds, it's England against South Africa in the final of the Rugby World Cup next Saturday.

That South Africa are there is no great surprise - their demolition of England in the group stages, combined with other results that ensured that France, Australia and New Zealand were all sent off into the other half of the quarter-final draw alongside the hapless English, meant that the Boks' route to the final was more or less assured (notwithstanding that they still had to see off a flamboyant challenge from Fiji and survive a physical examination from Argentina).

That England are in the final, however, is just bizarre given where we were only four weeks ago. After that first encounter with South Africa, where England looked utterly clueless, I (and just about everybody else I'm sure) couldn't possibly see how we could even think about getting beyond the quarter-finals and, to be frank, the prospect of not making it out of our group looked a distinct possibility.

But now here we are in the final and I have to say that, as the semi-final unfolded and began to get towards the business end of the match I was, in a surreal kind of way, the most relaxed I think I've ever been watching England play rugby. There were two reasons for this:

Before the game Johnno had emphasised the importance of England staying in the game, that if the scores were close after an hour then all the pressure would be on France and he was absolutely spot on. You see, he knows what he's talking about does Johnno and I trust in his opinion as implicitly as I trusted in his leadership when he was at the helm of the 2003 Sweet Chariot. So, as the game approached the hour mark with only a point in it and Mad Bernie sent on Michalak with France camped in the English twenty-two, I pretty much decided there and then that England would win it.

Why? Well, the fact is that France's much maligned ultra-conservative approach had, up to that point, been a success - they were winning the battle for possession, were winning the battle for territory, they were ahead on the scoreboard and had the white shirts pinned back in the English twenty-two. Another score for France and it was probably game over and in Lionel Beauxis they had the man to strangle the life out of the English challenge, so when Freddie Michalak emerged and almost immediately butchered a relatively straightforward drop goal chance that Beauxis would have nailed, England were off the hook and back in the game. The rest, as they say, is history.

England's style (or lack of style) has attracted so much flak from pundits and so-called experts south of the equator but such criticisms miss the point somewhat. It was France who dictated the tempo of Saturday's semi-final - it was they who had the majority of the ball and it was up to them to break down the English defence. That France chose to kick deep more often than not was a tactical decision for them - England didn't make that decision for them. Did the so-called experts expect England to just grant the opposition time and space to play? Whilst I'd agree that England's use of the ball wasn't the most imaginative, again much of that was down to the stifling nature of the French defence. What were England to do - throw long cut-out passes into a crowded midfield a la Contempomi?

England's first half against Australia showed that, when the time is right England can play with the ball in hand but the lesson to be learned from the quarter-finals and semi-finals of this Rugby World Cup is that, rather than go out and play to some pre-conceived idea about how the game must be played, teams must play what's in front of them and, truly amazingly, England appear to have stumbled across the formula for doing just that. Will it be enough against South Africa? I've no idea...I'll just have to wait and see what Johnno says :)

Good analysis there TF. There’s something special about Michalak and semis against England isn’t here?

You get the feeling that England’s plan this time around should be to be within 5 going into the last 20 minutes, and then wait and watch for any Bok wobbles. That’s how Australia and NZ were eliminated. At least England will shut off SA’s main try-scoring option; the Habana intercept.

Here's more motivation for you guys

Great post. I agree totally, when Michelak came on I was thinking "Is now the time to be quixotic?".