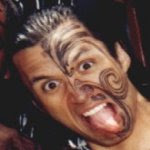 In the end losing to New Zealand by only 17 points turned out to be something of a result for England. The press appear to be surprised at how uncompetitive England were. I wasn't, for reasons previously explained.

There also appears to be some surprise that Charlie Hodgson let Ma’a Nonu run straight through him for Muliaina's try. Get real - he's never been able to tackle and the All Blacks know that.

Mind you, Nonu’s pass to Muliaina was clearly forward.

I therefore blame the ref for this defeat and will continue to do so for the foreseeable future..
Posted by Total Flanker at 12:27

I do think England's forwards played a very good first half, and the interception try before halftime helped keep the match competitive...all in all though, not a great weekend for Northern Hemisphere rugby.

It was a brilliant weekend for NH rugby; Scotland beat Argentina C. It's not often that happens.

Can someone please explain to me what all the fuss about Sheridan is about?

PS- Happy father's day to all the dads out there on the Blogosphere.

PS- Happy father's day to all the dads out there on the Blogosphere.

We don't get to have our Fathers' Day until September. Who said NZ was behind the times??

TF; agree re Dunning but everyone knows he's rubbish. Even (especially?) the Aussies.

But Sheridan was being built up here again over the last week; Hayman wasn't there anymore and he's the only person who could ever master the Strongest Man in the World etc...

But he got done over by bloody Greg Somerville!! That happens to no-one!

To be fair it's the NZ press/coaches that have hyped Sheridan on this trip rather than us Poms. Sheridan's pretty good and for some reason is at his best with Vickery on the other side - he needs to develop a similar partnership with Stevens. I don't think Somerville turned him over as such - more like collectively NZ were a much better scrummaging unit than England, rendering him ineffective.

Anyway, he's out of the 2nd test so get ready to face the mighty Tim Payne (less spectacular but very solid).

We lost a RWC quarterfinal to a forward pass, remember?

If Nonu's pass was forwad, just subtract 7 points from our final score (you know and I know that they would have not relaxed with such score, but I'm being kind on England) and that makes it 20-30.

So, blame whomeever you want, but we all saw that the All Blacks were the better side.

We were knocked out at the Quarter – Finals partly because of a forward pass.

But we were never going to win that Cup, because we had no combinations, and because they were out of match practice.

Re the forward pass - I was being (or was at least attempting to be) ironic. Sorry.

But I'm not saying that we c(w)ould have won it but for forward pass.

I'm saying that forwad passes do happen and sometimes go unseen by the refs.

I have never ever blamed on to the referee for a loss and I don't like to see that in rugby (which happens often, sadly).

If anyone is going to complain to the referee once the game is over, he/she should not even start the game.

Totalflanker, I appreciate your irony. Perhaps there has been much talk about Wayne Barnes just because the All Blacks loss. New Zealanders and All Blacks supporters around the world should learn that they can lose like any other team loses and there's no need of making the whole world guilty. But you ought not to believe that we All Blacks supporters are all alike. It is not fair that we are all guilty of what the loudest say.