Rugby and beer (not necessarily in that order) 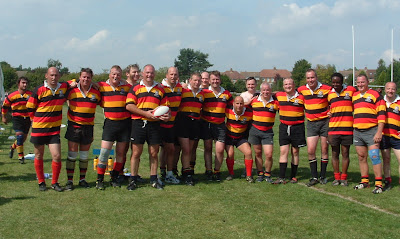 I've been asked to mention the Ashford RFC rugby and beer festival, taking place on 6th and 7th September - and am more than happy to do so.

A team from Uzes near Narbonne in southern France is among 10 sides already confirmed for the Vets’ tournament at the Ashford club in Kent on Saturday 6th September, while six women’s teams have signed up for their tournament on Sunday 7th.
Ashford Veterans, who witnessed the Uzes team (allegedly containing a number of ex-French internationals) play in Narbonne in May, apparently considered retiring en masse on the spot but have all pledged to be at the festival, alongside 2007 champions Maidstone and perennial attendees Old Shootershillians - with all money raised going to The Wyvern Special Needs School.

All participants can camp for free and receive free entry to the beer festival, which offers more than 40 real ales and ciders, pig roasts and live music all weekend. Each team is asked for a minimum £15 entry fee as a charitable donation. Bargain!
Any team interested in participating should check out the festival website or contact organiser Chris Akers.
Posted by Total Flanker at 12:54

Wish I could go, but I'm in Australia. That's 300km per ale if I managed to get through all of them!

Hi, in fact there were no ex-international french player in Uzes team! ^^ and Uzes is near Montpellier or Nimes more than Narbonne.