Just in time for Christmas? 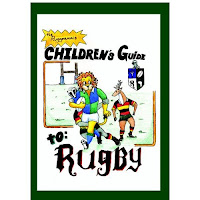 Children's Guide to Rugby is, I'm told, the second rugby book by Dan Bair, scrum half for Washington Irish in the United States.

His first book, Rugby Match for the Homeside, apparently chronicled the events of the Ruggamals being kicked out of their forest due to construction and having to compete in a rugby match to be allowed to live in a new forest. His new book, however, focuses on teaching children how to play the game using the Ruggamals as main characters.

A Christmas present for the poor chap who refereed me last week, perhaps?


(Thanks to World Masters Rugby for the heads up.)
Posted by Total Flanker at 23:41