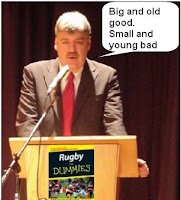 There's been plenty of speculation about who might feature in Martin Johnson's England squad for the Six Nations, yet while many pundits have been making a case for the inclusion of exciting young talents like Ben Foden and Steffan Armitage, the ever predictable Stephen Jones has, like a broken record, once again been advocating the inclusion of older, more experienced heads.

And so, to add to previous Jones picks to save England rugby such as Julian White and Danny Grewcock, the winner of the prestigious 2008 Total Flanker Living in Cloud Cuckoo Land Award is now calling for the inclusion of the likes of David Barnes, Duncan Bell, Andy Goode, Ben Cohen and Ben Kay, not to mention Dean Richards, Bill Beaumont, Bob Hiller, David Duckham, Wavell Wakefield and Price Alexander Obolensky.

Not even Jones, however, is barking enough to recommend the recall of Ian Balshaw.
Posted by Total Flanker at 22:49