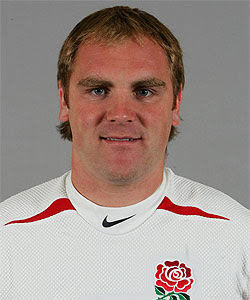 England's new dawn, the brave new world into which Johnno will lead us, the journey back to the pinnacle of world rugby is, it seems, now reliant on the performance of a slow, non-tackling fly half in the not inconsiderable shape of Andy Goode.
Being very experienced and somewhat big-boned, no doubt he ticks all the boxes of a certain well known Welsh journalist but, come on...is this really the best we can do?
Setting aside his (lack of) talents, does Johnno really think that he is any better than say, Charlie Hodgson, or for that matter any of the three fly halves that only a few weeks ago were selected in the elite England 32?
Granted, Goode has been racking up the points in the Top 14 in France but, I mean, why select Flood, Cipriani and Geraghty in the elite squad if two of the three were going to be passed over at the first sign of injury for someone who is never, ever, going to be anywhere near world class.
No doubt Goode will now have a stormer against Italy and be a permanent fixture for the rest of the 6 Nations - leaving England's development plans where exactly?
Posted by Total Flanker at 22:40

Three minutes in we all thought his was the best comeback since Lazarus. Shame the game lasted another 77 minutes