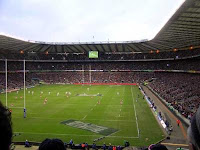 So, England first choice fly half Toby Flood has a calf strain and so England call up a player from outside the elite squad rather than go with next in line, Shane Geraghty.

Then Danny Care slips on an icy step and damages his ankle and England turn to a player outside the match 22 at the expense of scrum half cover Ben Foden.

And finally, Mike Tindall injures his back in the gym (what on earth was he doing in the gym 2 days before a match, incidentally) and England decide to bring in an honest plodder, again from outside the 22, instead of promoting Matt Tait from the bench.

why aren't your selectors looking to the sevens team?. those guys showed a lot of heart and some real skills last night to grind out the cup final against NZ.

Well, on the bright side, Nick Mallet gave England the biggest assist of all by starting Mauro Bergamasco at fly half. He did a better job of serving up Ellis and Goode than he did his own teamates.