Lament of an ageing forward 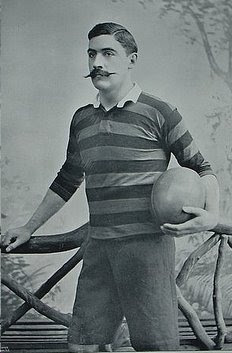 Thanks to Dan at World Masters Rugby Group...

I woke up with a headache that’d hung around for days
And half a pack of aspirin wouldn’t make it go away
I knew the thing that caused it, and it made me feel depressed
It wasn’t too much alcohol, but simply too much stress
I rang my local doctor in my quest to get it fixed
A chat and some prescription drugs would surely do the trick
I drove to my appointment and arrived in ample time
Then waited, watched and read until the next name called was mine
I walked into the doctor’s room, he checked me up and down
Then peered over his glasses as he asked me with a frown;
"Are you worried your blood pressure might be up again?
Or is your gout and hernia a cause of constant pain?
Are you being bothered by your bulging lumbar disc?
Your slowly failing eyesight or your subcutaneous cyst?
Your rheumatoid arthritis or those ulcers on your tongue?
Your kidney stones, your fungus, or those dark spots on your lung?
Your low sperm count, your dodgy knee, that cancer on your hand?
That rash around your privates, your grotesquely swollen gland?
Well surely, then, you’re worried ‘bout your pending heart attack?"
"No", I said, "I’m worried that my son’s become a back"
"He’s only short in stature and his thighs and arms are small
He cries when he gets injured and he cannot catch the ball
He’d rather kick than tackle and his nose is deadly straight
He’d rather hang out with his mum than drink beer with his mates"
"His ears aren’t cauliflowered and he will not tape his head
And every night, by 8 o’clock, he’s tucked up in his bed
He’s fast and he’s elusive and the girls all think he’s cute
And as for scrums and lineouts, well, he hasn’t got a clue"
"His body isn’t hairy and he very rarely sweats
He’d rather read a book than play in winter when it’s wet
He’s never sculled a schooner and he’s quick to bite and scratch
He whinges, whines and finds my Garryowens hard to catch"
"He’s never punched a punching bag, or bench pressed his own weight
Or stacked the bar and squatted – doing sets of six to eight
His head is bigger than his neck, he can’t secure the ball
He’s never seen a prop up close or driven a rolling maul"
As I described the symptoms my good doctor simply smiled
I said: "You don’t understand – this is my only child.
I tell you doc, I’m worried, is there something I can do?"
"Give it time," the doctor said. "Your son is only two!"
Posted by Total Flanker at 08:42

Thanks, Flanker. I will keep that in my mind for my Grandson, Duncan!