After Bloodgate, now we have Biscuit-gate. 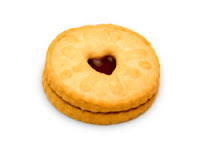 All sorts of shenanigans this week surrounding the RFU's disciplinary action against Saracens' Director of Rugby, Brendan Venter, who appears to have been handed a 14-week ban for eating a biscuit during the disciplinary procedure.

The RFU's 11-page statement referred to Venter's "arrogant behaviour" during the hearing which apparently included "eating a biscuit".

"You don't go into the Old Bailey eating a biscuit. You show a degree of respect to the process in the court," said Old Fart in a Blazer Chairman of the RFU Management Board, Martyn Thomas.

"Why did the RFU provide biscuits if they were not to be eaten?" asked Sarries Chief Executive Edward Grifftiths, perhaps not unreasonably.

Meanwhile Sarries hooker Schalk Brits received a reprimand as to his future behaviour after being observed sucking a sherbet lemon.