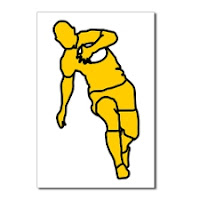 Yesterday was a momentous day.

Britain got its first peacetime coalition government since 1922 and I appeared in a winning Touch Rugby team for the first time since 2008.

Being unqualified to comment on the machinations that led to the unlikely Tory/Lib-Dem pact, I must reserve my observations for the evening’s Touch Rugby, which once again took place on the playing fields of Chesham.

Having played the last 4 summers ostensibly in the same team – the Chairman’s Choice – I had made the somewhat contentious decision last week to throw in my lot with fellow Vet Steve and his “Odd Bods” team, a decision that was greeted with predictable “banter” yesterday evening from the Chairman.

Despite this encouragement, however, I lined up with my new team - decked out in not-very-stylish, lurid yellow, Primani t-shirts - a mixture of Vets, rookies, kids and one or two players borrowed to make up the numbers, to take on the “Misfits” a similarly assembled combo of newbies and players of a more mature persuasion.

On paper therefore it looked like the teams were fairly evenly matched, but a slow start saw us concede an early try and the signs looked ominous. The try, however, appeared to deliver a much needed kick up the arse and our game just sort of…well…clicked. Playing simple Touch we began to use up our 6 possessions effectively, made ground up the middle, attacked space and worked the overlaps, resulting in one-way traffic which eventually saw us run out winners by 12 tries to 3.

The result leaves the Odd Bods as the early pace-setters in the league and fully vindicates my choice of team. Well, no, not really – with all due respect to our opposition they are unlikely to be the strongest team we face this summer and I must also point out that the Chairman’s choice team were also victorious, continuing the habit of every team I play for improving when I leave! (That said, the Chairman’s team did appear to have a cast of thousands so it’s unlikely I’d have had very much game time…)

As a footnote I must also point out that I failed to get on the scoresheet – that’s no tries for me in competitive Touch since 2007.
Posted by Total Flanker at 13:06