That was the season that was...

For those expecting a review of the professional game, look away now.

The fact is that if you are a rugby player in the UK then, unless you happen to be in the privileged position of being a professional player challenging for end-of-season honours, the chances are that your season is now well and truly over and you are already thinking of barbecues, beer and anything else that will get you out of shopping on a Saturday afternoon.

Around this time of year, therefore, I tend (in my habitual self-absorbed way) to look back over the last 8 months or so and reflect on what kind of season my former and current clubs have had.

To kick off - Peterbrough, where I started my club rugby career, playing three seasons in the Colts before making my senior debut as far back as 1983. At the end of last season Borough appear to have secured a somewhat miraculous promotion, with the entire Midlands 1 Division seemingly re-designated National 3 Midlands. Heady heights indeed and, with Borough finishing 7th out of fourteen, never was the phrase mid-table respectability more apt.

Now to Guildford (previously known as Guildford & Godalming), for whom I played in 1986-87 while at the local College of Law. Guildford were also promoted at the end of last season (only legitimately so) - from London 3 SW to London 2 SW - and they more than held there own in the higher league, finishing 4th behind London Irish Amateurs, Guernsey and Tottonians.

When I moved to London in 1987 I played a couple of seasons at Ealing who, at the time, were something of a yo-yo club, moving between the London and National leagues. It seems, however, that Ealing are now very much established National 2 South - and a 3rd place finish suggests perhaps loftier ambitions in the years ahead.
Barnes, meanwhile, where I played some of my best and most enjoyable rugby between 1991 and 1995, were always going to face an incredibly tough season having been promoted via a play off to National 2 South the previous season. So it proved. Despite finishing second bottom, however, Barnes did manage a couple of notable away wins at Lydney and Richmond and finished the season very strongly, all of which bodes well for life in London One next season.

And finally...Chesham, where I (very occasionally) strut what little stuff I have left these days. Chesham have had 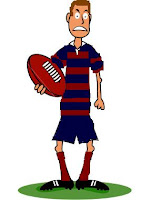 a pretty decent season really - ending up in 4th spot in Berks/Bucks & Oxon 1 North (an improvement of 2 places on last year) whilst also introducing several younger players from the junior ranks to senior rugby, both at 1st and 2nd XV level. The trick, I guess, is to keep the young'uns interested through into their twenties to fill a noticeable generation gap. Then all the old gits still clogging up the ranks of the 1st and 2nd XVs can find their true level with the Vets.

Speaking of Vets, one victory plus several other very competitive outings represents an improvement on the last couple of seasons - mostly, I suspect, because I wasn't available very often! The fact is that I managed only one game this season - my lack of fitness going into the season contributing to the succession of injuries I subsequently suffered. Disappointing really, but a lesson for next season perhaps.

That's that then. A mad dash run through the fortunes of the clubs I've graced or disgraced over the years. Sadly time stops for no man and yet another season bites the dust...
Posted by Total Flanker at 17:48

Any chance you can get a run in is all good, Flanker. Between work schedule, blood thinners and 49 year old bones...I know my limitiations. It was great to at least get a couple of runs in and play. Be happy that you are still getting a chance to get a run in and hang out with the guys. It's such an amazing mixture of people involved with this game, the social aspect of the sport is such a balm for the soul. keep on ruckin'!

So what you're saying is that every team you've graced is now doing better since you left? ;-)

Almost without exception, yes. Must be a coincidence!!!

I always used to dread the end of season when I was playing, for some of the reasons you have covered.

Hope Big Dai has identified a coincidence for your sake - I have noted similar coincidences when I move on. : )