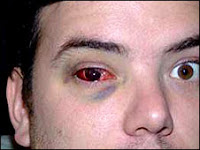 "To feel something slide inside your eyeball, and get pulled out at an astonishing rate… I can't fathom the words to describe the immense pain."

The words of 24 year old Clarence Harding, the Gravesend number 8 who has lost the sight in his right eye having been gouged during a match against rivals Maidstone in January this year.

No one has yet been punished for the attack and the Kent police are apparently still investigating the incident.

That's awful. Really feel for the guy there; I honestly would rather lose almost anything over my sight.

Surely the law has to say that by consenting to play a contact sport, you allow any bodily harm that may come about due to play *within the rules of the game*, but once someone breaches those rules you could be charged criminally.

I think it's unfair for someone to say get charged with assault for a punch or a tussle or something, but something like this that causes lasting damage should result in jail terms. This is sickening, and the guy who did it is scum and should be in jail.

I don't care if it happened on a rugby pitch-yeah, it's a risky game, but this is just assault and battery. Simply awful...particularly when this victim knew who gouged him.

If he knows who did it - press charges!!! This is common assault.

I think the term is 'volunti non fit injuria' was used when a fan got injured during an F1 race (he volunteered to watch something dangerous - or something like that).
Ditto for rugby, but rugby players don't volunteer for potential gouging so therefore I say take the gouging coward to court and get gougers out of the game.
Ditto for spear tacklers - get the cowards out of our game. Rugby is a tough game but should never lose its honour - which reminds me that even the hardened Kiwis when beaten by Munster way back in 1978 - they were more than honourable afterwards and maintained rugby's comraderie - see http://www.greatmomentsofsportsmanship.com/new-zealand/the-mighty-all-blacks-march-as-snow-white%E2%80%99s-dwarfs/

Meanwhile oust the coward - let the public know what the gouger did, dump him from the game and give the young man some compensation.

Disgusting this. Rugby is a tough game but tough WITHIN the rugby laws. The perpetrator needs to be criminally charged as this action was outside the boundaries of our beautiful game.