Should he stay or should he go now? 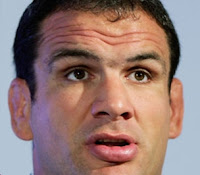 Rumours suggest that the powers-that-be at Twickenham now want Martin Johnson to stay as manager on the condition that he will have to agree to a cull of his coaching team.
Who those powers-that-be are remains unclear. The dead-man-walking Martyn Thomas? The totally discredited Management Board? The “independent” Fran Cotton? Rob Andrew?
Whoever they may be, history shows that any such plan is just plain idiotic. I seem to recall the RFU tried something similar when Andy Robinson was in charge, sacking his coaching staff foisting John Wells, Brian Ashton Mike Ford upon him. We all remember how successful that was.
Posted by Total Flanker at 23:16

He should go. Even if he culls staff, anything except a convincing Six Nations win will see pressure put on relieving him of his position.