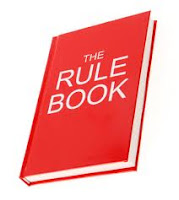 Concerning the selection of the 2012 England Six Nations squad, in delivering your words of wisdom to the unwashed masses thou shalt:

25.1.1 at every opportunity make reference to England's failed 2011 Rugby World Cup campaign, which reference must include a minimum of 3 of the following phrases: dwarf-tossing; Tindall-gate; drinking culture; irresponsible; unprofessional; arrogant; not like Wales;

25.1.2 refer to the exclusion of Danny Care from the squad, making spurious comparisons between the disciplinary regimes of Stuart Lancaster and Martin Johnson;

25.1.3 use the following phrases: ‘exciting’, ‘youthful’, ‘fresh’ and ‘unburdened’ or, alternatively, ‘inexperienced’, ‘callow’ and ‘unproven’ or use all preceding phrases in morass of confusing mixed messages;

25.1.4 continuing the theme, emphasise the importance of England building towards the 2015 World Cup whilst simultaneously insisting that England win every match in the Six Nations;

25.1.5 pick a Premiership player at random and label him as the answer to England’s prayers with a view to calling for him to be publicly flogged when it all goes pear-shaped; and

25.1.6 if all else fails, dust off your annual "Bring Back Danny Cipriani and make him captain" article for publication at the first sign of whoever is chosen to play no.10 failing to walk on water.