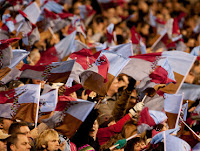 BBC Breakfast on Sunday, for instance, failed to mention Quins’ victory over Leicester at all, preferring to focus on England’s meaningless football friendly, the Monaco GP qualifying, Carl Froch, the second day of the Trent Bridge Test and the third round of the golf at Wentworth. And poor old Englebert Humperdinck’s disaster at Eurovison, naturally.

Meanwhile, much as the printed press can’t write any article about the England rugby team without mentioning dwarf tossing, so Quins’ victory cannot be reported, it appears, without reference to Bloodgate. Lazy, very lazy.

So let’s put this right. Quins were simply excellent on Saturday and it warms the heart to see so many English players playing such fast and accurate rugby. It all bodes well for the summer ahead.

Interesting that all the other items you mention were on the BBC in one way or another (TV or Radio).