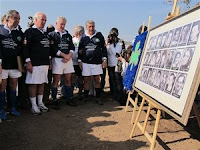 Only just realised that last weekend (13th October) marked the 40th anniversary of one of the greatest survival stories ever – the crash in the Andes of a plane carrying Old Christians Rugby Club to a match in Chile.


The remarkable story of how the survivors of the crash kept themselves alive by eating the flesh of dead passengers is well known, having been immortalised in the movie Alive.

40 years on and it’s still an incredible story and fitting that the anniversary was marked by a match featuring veterans of the disaster against Old Grangonian, the team they were due to play on that fateful day in October in 1972.
Posted by Total Flanker at 23:07

I remember being about 14 the first time I had read the story. Amazing story of survival. How would any of the rest of us have reacted under those circumstances?