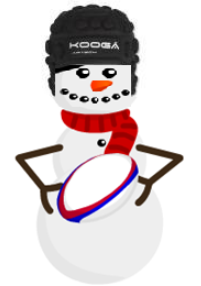 (other makes of scrumcap are available).
Posted by Total Flanker at 08:00 No comments: Links to this post

Posted by Total Flanker at 12:24 No comments: Links to this post

If I was Shaun Edwards I'd be more than a little peeved.

Not only has he been overlooked by Warren Gatland for a place on next year's Lions trip, he now doesn't even get to be interim head coach (in the absence of Gatland and Rob Howley) for the Wales tour to Japan next summer.

Once very much thought of as Gatland's right hand man, Edwards now appears to have slipped way down the Welsh pecking order and will only assist Robin McBryde who leads the tour to Japan.


Is it cos he is English?

Posted by Total Flanker at 22:40 No comments: Links to this post

Crikey, so here we all are again. Another 12 months has flashed by and we find ourselves another year older and deeper in debt and once again gathered in this prestigious venue with festive celebrations all around us as we sip at our glasses of ginger beer and contemplate those that have delighted us, impressed us or otherwise come to our attention during 2012.

Yes, ladies and gentlemen, boys and girls, it’s time to welcome you all to the 6th Annual Total Flanker Awards ceremony.

Without further ado let us dive straight in to the first award of the evening - the Total Flanker Are You Taking the Piss? Award.

There has been much criticism over the years about the attitude of certain players and certain countries to the international eligibility rules. Much of it has been ill informed, much of it has been motivated out of a sense of jealousy and much of it has been driven by pure xenophobia. Without wanting to shake up this particular hornet’s nest, however, there is one player in particular who has made an utter mockery of the whole system. Step forward Michael Bent. Yes, he has an Irish grandmother which, technically, qualifies him to play for Ireland, but for the Taranaki tighthead to have stepped off the plane at Dublin airport and straight into the Ireland squad to play South Africa, having never set foot in the country before, is as good an example of urine extraction as you are ever likely to find.

Right, calm down, calm down, let’s move on to something slightly less controversial as we consider the Total Flanker Like a Duck to Water Award.

A few candidates to consider here. Young Craig Gilroy has come into the Ireland team on the wing this autumn and already looks like a Lions candidate. Ditto Tim McVisser for Scotland although he may need to learn to tackle first. For England Joe Launchbury has made playing international second row look ridiculously easy and, on the strength of a 15 minute cameo against the All Blacks, Freddie Burns looks to the manor born. However, the winner of this prestigious award is none other than Stuart Lancaster who took on the role of England head coach a year ago with little experience of top level rugby and has pretty much not put a foot wrong since. Yes, we might quibble with certain selectorial decisions but ‘twas ever thus. Lancaster has stuck to his guns and now has a young, united and motivated squad plotting a course toward 2015 and he richly deserves the honour.

OK, now for our next award - the Total Flanker Ha Ha, Nice One Award. No award ceremony would be complete without an award for the IRB and this year is no exception. Most years the governing body is honoured for gross incompetence or breathtaking negligence or for both. This year, however, is different. This year the IRB is being honoured for its surprisingly wonderful sense of humour, best demonstrated by the shortlisting of Owen Farrell as IRB Player of the Year. Now, I’ve nothing against young Master Farrell – during the 6 Nations and more recently against New Zealand he certainly demonstrated that he has the appetite and temperament for the international game. But the best player in the world? Tee hee.

Right we're half way through so let's move swiftly on to the Total Flanker About Bloody Time Award. Only one nominee here - Argentina. Disgracefully excluded from serious regular international rugby for so long despite a more than decent record against the so-called top-tier nations, Argentina finally took its bow this year in the tournament formerly known as the Tri Nations. OK, so they didn't manage a win, but they far from disgraced themselves and the improvements in their game were there for all to see in their victory over Wales last month. Now, what to do about Samoa, Tonga and Fiji?

And so to the penultimate award of the evening - the Total Flanker Absence Makes the Heart Grow Fonder Award. This award is sponsored by the gentlemen of the British press who nearly all appear to have a bee in their bonnet about a certain Steffon Armitage. The basis of this obsession appears to be that the longer he plays in France and is unavailable to England, the better he gets. I admit I have also from time to time thought that there must be something about the slightly rotund Toulon openside - he was voted the Top 14's Player of the Season by Midi Olimpique after all - but the fact is that he knew the RFU stance on foreign based players before he signed for Toulon. If he is as keen as he says he is to play for England the answer is simple. Come home.

Finally we turn to the last award - the Total Flanker Am I Right to be Worried? Award.

Please step forward a man who is no stranger to these Awards - Mr Warren Gatland. Sorry, but I remain entirely unconvinced that this fella is the right one to lead the Lions to Oz next summer. For every success he has had with Wales there have also been periods of distinct mediocrity; his tendency to spout off about other teams and other players do him few favours; and as the existing Welsh national coach he is horribly conflicted. And, yes, he's a kiwi and we really should be able to produce a coach of our own.

That’s all folks. Last orders please and quick reminder of this year's Awards:

Renowned world famous blogger (ahem!) Total Flanker today hit out at reports that the RFU is considering abandoning its policy of introducing controversial 'away' kits for the England team following the general furore surrounding the latest 'regal purple' outfit worn against Australia in November.

The policy, which in recent years has seen the England team parade around in red, purple, black, 'anthracite' grey and now 'regal purple', has attracted criticism from various quarters, not least from the ageing (and allegedly ex-) backrow forward.

"I'm as sick as a parrot" claimed the portly breakaway. "At least 50 per cent of my output on the blog involves me whingeing on about England's change kit, with the other 50% mostly being about how crap the team is.

"Not only have we beaten New Zealand this week, now the RFU might do the decent thing and restore a bit of pride to the shirt.

"It's an utter disgrace I tell you, what the hell am I going to blog about now?"

Posted by Total Flanker at 20:47 No comments: Links to this post

It's simple Debbie. Bloody well rule it out.
Posted by Total Flanker at 23:21 No comments: Links to this post

So predictable that, following Saturday's magnificent victory against the All Blacks, along comes fate to kick us in the bollocks by pairing England with the Welsh and the Aussies in Pool A at RWC 2015.

Never mind - by 2015 the Wallabies' scrummaging renaissance will have been consigned to history, Wales will be on their third coach following Warren Gatland's post-Lions ousting by the Welsh players and England will be defending a 3 year unbeaten run...bring it on!

Carried away? Me?
Posted by Total Flanker at 17:14 No comments: Links to this post

I was bloody well there!

First time at Twickenham for an international match for several years for me and an utterly magnificent occasion. As I said to my mate with 20 minute to go: "Is it always like this?"

The tendency of most English fans and reporters after beating a team like the All Blacks is to go over the top somewhat, and lo and behold the national press have not disappointed in this respect. It would be churlish, however, not to give the England players due credit. In terms of intensity and effort they were magnificent to a man. Yes, there was a frustrating tendency, especially in the first half, to kick too long and too often - but the energy and aggression in the tackle and the ruck knocked the All Blacks back on their heels time after time and England were well worth their 12-0 halftime lead.

What was most encouraging, however, was England's reaction to the All Black mini-comeback. At 15-14 it really did look as if New Zealand would kick on to win but it was the men in white who came roaring back with 3 tries which visibly knocked the stuffing out of their opponents and had the stadium totally rocking.

As for New Zealand, while I'm sure that last week's novovirus can't have helped, it did look to be more a case of them just not being prepared for the ferocity of the English onslaught. All unbeaten runs have to end but this one will hurt, I'm sure, and no doubt we'll get payback next time out.

A few whinges not in keeping with the general tone of this post:


Oh, and one more thing on a far more positive note. Freddie Burns looks to be one heck of a player - to the manor born.

Posted by Total Flanker at 12:11 4 comments: Links to this post