Some shocking hairstyles on display in the England Under 20 front row yesterday as England beat Wales in the final to claim their first U20 World Championship.

Luke Cowan-Dickie and Alec Hepburn, with hairstyles last observed in a 1980s discotheque, achieved the remarkable feat of making Joe Marler look the epitome of elegance. At least they won - with those barnets I doubt they could contemplate defeat. Perhaps that's the answer - make all England players sport ridiculous hair and embarrass them into winning?

Anyway, congratulations to England on their win and to both teams for making this an all northern hemisphere final for the first time. What odds on the feat being repeated by the seniors in 2015? 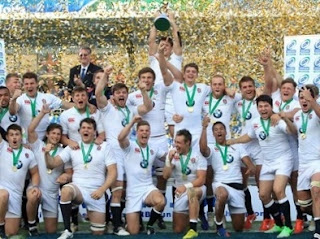