I'm not quite sure why Racing 92 are so upset with Martin Castrogiovanni after pictures emerged on Twitter at the weekend of him partying with Zlatan Ibrahimovic. 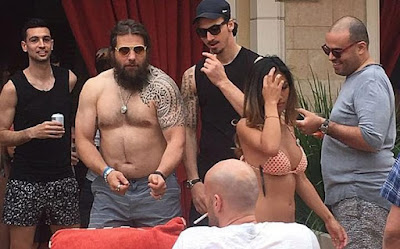 Castro missed Racing's  Champions Cup semi-final clash with Leicester on Sunday as he had "a family matter to attend to in Argentina".

Posted by TotalFlanker at 08:16 No comments: Links to this post 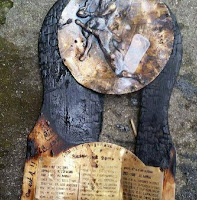 A few red faces, I imagine, among the players of French amateur club Chamalieres, winners of the Auvergne regional title with victory over Cisternes in the final at the weekend.

Unfortunately Chamalieres' victory is where the good news ends, judging by this picture of the wooden championship trophy which, it transpires, ended being barbecued during the post-match festivities.

No doubt it was one of those seemingly hilarious-at-the-time moments that…erm…well...turned out not to be very funny at all.

I'm no detective, but I suspect alcohol may have been involved...
Posted by TotalFlanker at 19:20 No comments: Links to this post

The Passing of the Torch

I, DYLAN MICHAEL HARTLEY, of Franklin's Gardens, Weedon Road, Northampton NN5 5BG, with full title guarantee hereby irrevocably assign the benefit (subject to the burden) of all rights in and to the title:

“THE BAD BOY OF ENGLISH RUGBY”

to JOSEPH WILLIAM G. MARLER of The Twickenham Stoop,  Langhorn Drive , Twickenham , Middlesex  TW2 7SX to hold absolutely throughout the universe in perpetuity.

Posted by TotalFlanker at 18:28 No comments: Links to this post 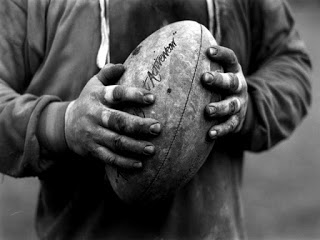 Some might say that just over half a season of being involved on the periphery of coaching my son’s Under 13 team is no qualification for me to begin proffering my advice on coaching youth rugby.

To which I say: why should knowing next to nothing about a subject prevent me from publishing a guide about said subject for anyone who is willing (or silly) enough to read it? (It never has before).

So, with that preamble out of the way, why get involved in coaching youth rugby at all?

I could trot out the somewhat trite reply that it is an honour and a privilege to be involved in bringing through talent for the future. Which is true, I suppose, but far from the completely honest answer, which has more to do with the fact that if I’m expected to turn up with my son to training on a regular basis I may as well at least pull on a pair of boots and run around a bit.

What I have found, though, is that any pre-conceptions I had about coaching kids have gone right out of the window.

I had assumed, for instance, that having been a reasonable player in my time, passing on rugby knowledge to the boys would be relatively straightforward. Wrong.

I had assumed that the boys would listen to what I had to say. Wrong.

I had assumed that once I’d showed the boys what it was that I wanted them to do, they would then do it. Wrong.

I had assumed that once they had succeeded in doing something in training, they would then replicate it the next time they played. Wrong.

What I failed to realise is that, much like for a 17 year old learning to drive, there is one hell of a lot to take in for for kids learning to play rugby.

So, what are the answers?

Buggered if I know, if I’m honest, but here is what appears to have worked so far:

- Keep the boys that want to mess about apart so that they are in separate groups with players who are keen to work hard and learn - peer pressure can be a wonderful thing;

- KISS (Keep It Simple, Stupid) - work at one thing at a time with plenty of repetition until it becomes second nature;

- Sign up for a coaching course. I haven't (yet) but it must help to have some idea what you're talking about, surely? and

- Dust off your sense of humour and have fun – if you’re enjoying it then, more than likely, so are the boys.

It’s hardly ground breaking advice, I know, but what I would say is that, despite my own pretty negligible contribution, I have been astonished at the ridiculous and disproportionate pride I have felt when the team comes together and plays well.

It’s natural enough for me to be proud of my son (who, to be fair to him, has enjoyed a cracking season) – but the vicarious sense of achievement generated by a bunch of 13 year olds - most of whom I hadn’t even met a few short months ago - is, quite frankly, ludicrous.
Posted by Total Flanker at 19:56 1 comment: Links to this post

Interesting snippet of the week...

... was the announcement of a 10 year deal to develop rugby in China between the artist formerly known as the IRB (aka World Rugby) and e-commerce company Alibaba.

The plan is to develop a mass participation, training and education programme, with the aim of having 1 million rugby players in China by 2026.

That's approximately an 18,000% increase on the current official playing numbers in China of around 5,500 but, given an overall population of circa 1.4 billion, would only involve a conversion (no pun intended) rate of around 0.07%...

Well, I find it interesting at any rate...

Posted by Total Flanker at 19:10 No comments: Links to this post

Georgia on my mind

Given the paucity of Italy’s performances during the 2016 Six Nations, there have been calls to introduce an element of promotion/relegation to/from the championship, either automatically or via a play off. 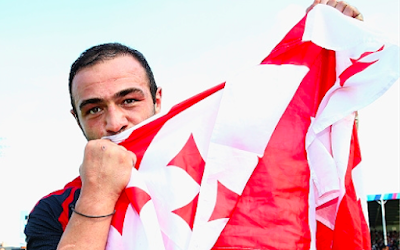 Georgia, in particular, are considered worthy of a chance to join Europe’s elite rugby competition, given their dominance of the European Nations Championship in recent years.

I, for one, would welcome Georgia’s integration into the Six Nations but I do query why it would be necessary to relegate one of the established nations?

Why not evolve the competition into 7 Nations?

Yes, there may be issues with the calendar and the fixture list, but it can’t be beyond the wit of man, or even of rugby administrators, to find a workable solution.

A first step would be for the established six countries to start including Georgia regularly in their fixture lists, possibly in November, with a view to accepting the Georgians into the fold in due course. After all, that is what happened with Italy.

You know it makes sense.
Posted by Total Flanker at 18:14 No comments: Links to this post 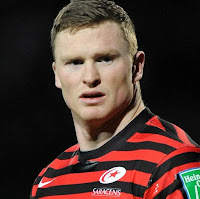 I see Chris Ashton was back in action this weekend.

Back playing for Saracens.

Back behaving like an utter wazzock.
Posted by Total Flanker at 12:45 No comments: Links to this post 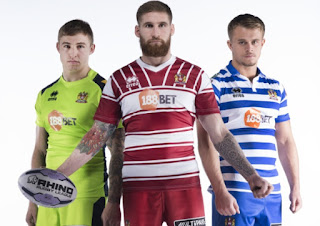 Having lost Josh Charnley to Sale Sharks this week, it is now being reported that Wigan Warriors have lodged an official application to join the Aviva Premiership with effect from the 2017-2018 season.

It emerges that the Warriors, who have previously lost the likes of Jason Robinson, Andy Farrell and Chris Ashton to Rugby Union, have been in discussions with Premiership Rugby and the RFU since the turn of the year.

Central to the discussions has, it seems, been the long term plans by World Rugby to (1) simplify rugby by depowering the scrums to avoid the continuous re-sets which currently blight the game and (2) create more space on the field by reducing the number of players per team to 13.

Premiership Rugby are, it is reported, keen to embrace Wigan and have set aside a fighting fund to compensate disgruntled Championship clubs who will be denied promotion to the Aviva Premiership in 2017.

The RFU is also said to be keen on the move which will allow the likes of Sam Tomkins and Sean O’Loughlin to be parachuted into the England squad in time for the 2019 Rugby World Cup.

Strangely enough no one at Wigan Warriors, Premiership Rugby or the RFU is available for comment.
Posted by Total Flanker at 06:28 No comments: Links to this post