Dunderhead of the Week 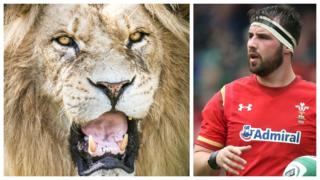 Time to revive the long forgotten Dunderhead of the Week award in recognition of the spectacular stupidity of Ospreys' hooker, Scott Baldwin.

The 29-year-old Baldwin missed his team's latest Pro14 fixture against the Cheetahs because he had been BITTEN BY A LION WHILE TRYING TO PET IT.

The incident happened during a team trip to Weltevrede Game Lodge on the outskirts of Bloemfontein, where everyone was - appropriately enough - warned not to put their hands into the lion's den.

As Ospreys' coach Steve Tandy points out, "You can't pat a lion on the head as if it's a kitten."

And yet that's exactly what Baldwin did. One word:Dunderhead.
Posted by TotalFlanker at 10:50 No comments: Links to this post

This week has seen London play host to the bids of France, South Africa and Ireland to stage the 2023 Rugby World Cup, with the respective bidding teams displaying their respective wares in front of World Rugby.

With France's president, Emmanuel Macron, deciding that he couldn't be arsed to attend the presentation or endorse the French bid, France's bidding team turned to an ingenious (although somewhat bizarre) Plan B by choosing to parade the young sons of New Zealand rugby legend, Jonah Lomu as part of the bid. Jonah quite liked France, apparently. Which is nice.

South Africa's strategy, meanwhile, appeared to be based on the fact that they once hosted the Rugby World Cup well over 20 years ago when that very nice, smiley man Nelson Mandela was President. No mention, surprisingly, that for financial reasons South Africa had recently decided against bidding to host the 2022 Commonwealth Games.

And as for the Irish, apparently if Ireland wins the bid to host the World Cup in 2023 it will somehow (and I kid you not) make rugby incredibly popular in the United States of America. Call me naive, but wouldn't hosting the event in the USA be more likely to do that?

Go figure, and while you’re doing that please bear in mind that the Irish bid has also won the backing of UK Prime Minister Theresa May. What could possibly go wrong?
Posted by TotalFlanker at 12:42 1 comment: Links to this post

To tackle or not to tackle? 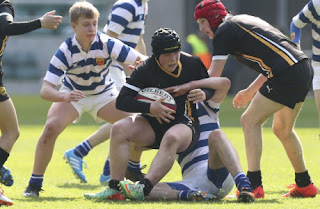 Fresh calls this week in the British Medical Journal to “ban harmful contact” in schools rugby to reduce the risk of injury, particularly to the head and neck, with researchers calling for the UK government to “put the interests of the child before those of corporate professional rugby unions."

I’m all for trying to make sure that kids are as protected as possible on the rugby field, but I'm far from convinced that a ban on tackling in schools is the answer. As long as good tackling technique is taught and teachers are well-trained in dealing with injuries then there is little doubt that the benefits of playing rugby – fitness, teamwork, discipline etc - far outweigh the risks.

And there lies the possible issue. In many state schools in particular the sports staff are simply not skilled or experienced enough to teach good tackling technique and in those instances I would agree that the kids playing contact rugby may not be safe.

I also have some sympathy with the argument that perhaps full contact rugby should not be compulsory in schools – it’s not for everyone, after all.

I can’t help feeling, however, that imposing a blanket ban would be a classic case of using a sledgehammer to crack a walnut.
Posted by TotalFlanker at 12:12 No comments: Links to this post

Billy Vunipola has said that he would take a pay cut to play fewer games and avoid burning out.

The 24 year old faces 4 months on the sidelines as he recuperates from his second major surgery of the year.

Given the intensity of professional rugby and the number of games top players are required to play these days, scarily it is now considered normal for players to have to go under the knife by the age of 25.

Certainly in England player discontent at the sheer volume of rugby required is on the rise, with neither the RFU nor Premier Rugby seemingly willing to pay anything other than lip service to the concept of player welfare.

Unless someone starts taking this seriously we may be closer than we think to players deciding enough is enough and withdrawing their labour.
Posted by TotalFlanker at 13:08 1 comment: Links to this post

Lion amongst the pigeons

Sean O'Brien, for no apparent reason, appears to have set a rather large cat loose amongst the pigeons by publicly criticising the British & Irish Lions attack coach, Rob Howley.

What prompted his comment is unclear, but apparently it was poor coaching and a lack of an attack gameplan that prevented the Lions from securing an historic 3-0 series victory in New Zealand this summer.

According to SOB, Howley struggled to "get stuff across," leaving the likes of Johnny Sexton and Owen Farrell to run the Lions attack.

Lord knows I'm no particular fan of Rob Howley as a coach (fabulous player that he was) but for SOB to single him out as the reason the Lions did not win a series in which (a) they were always massive underdogs and which (b) they led for a grand total of three minutes is, simply, as ludicrous as it is disloyal.

I hope, for SOB's sake, that this was a comment taken entirely out of context as, frankly, it does him no favours at all...
Posted by TotalFlanker at 17:34 No comments: Links to this post

The mystery of the exploding dumpling

I was a little alarmed by reports that Australia's coach Michael Cheika had revealed a small cut on his nose caused by an "exploding dumpling" on the eve of his team's test match against Argentina.

For one horrible moment I thought that Matt Dunning might be making a comeback...

Posted by TotalFlanker at 19:27 No comments: Links to this post

Roll up, roll up, get your tickets to the Total Flanker Hall of Wazzocks here.

Yes, folks, three brand new inductees to this prestigious and exclusive club, one as a result of a relatively recent act and two for their historic commitment to the cause of wazzockry.

That takes our current membership to eight and remember, the Hall of Wazzocks admissions committee is always open to your nominations, suggestions and bribes when it comes to other potential inductees.

CLICK HERE FOR THE HALL OF WAZZOCKS...
Posted by TotalFlanker at 00:07 No comments: Links to this post 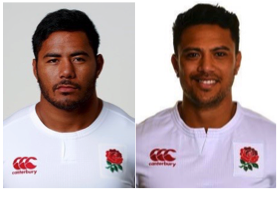 So it appears that Eddie Jones might be prepared to forgive and forget the misdemeanours of Manu Tuilagi and Denny Solomona, who last month were sent home from an England training camp for "team-culture issues".

Jones has said he will consider recalling the pair if their attitude is right.

For Tuilagi in particular, who at 26 now has a rather impressive rap sheet, it may be be said that he is drinking in the Last Chance Saloon. One can only hope that he is choosing to drink mineral water.
Posted by TotalFlanker at 21:41 No comments: Links to this post 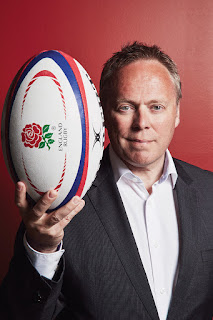 It appears that the RFU has itself a new CEO and it is…..(drum roll)….

Underwhelming as it may seem, could it be that the RFU is breaking with the habits of a lifetime by appointing somebody eminently qualified for the job and seemingly competent?

Time, no doubt, will tell.
Posted by TotalFlanker at 08:21 No comments: Links to this post

Whatever happened to: the Laws of the Game? 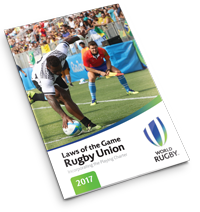 As another new season approaches and my son's team (now Under 15s) drifts back to training, I and the team's other coaches are once again faced with having to understand, and then explain, various changes to the laws of the game that have been introduced by World Rugby ahead of the new season.

It seems that every season there is a tweak or several, here or there, to the laws in aid of something or other that no one ever really bothers to explain, it being more a case of "it's a new season, let's make life as difficult as possible for players, coaches and spectators."

My recollection (and this may be case of the rose-tinted specs being worn again) is that seasons would come and seasons would go with very little intervention from the powers-that-be. I do recall being somewhat indifferent when the value of a try was changed from 4 to 5 points and I remember being a little confused by the idea that the team driving a maul forward were no longer awarded the subsequent put-in at the scrum. I also recollect being entirely bemused by the concept of a team kicking a penalty into touch and being awarded the throw-in.

But that's it. Only three law changes in god knows how many years of me playing rugby through the eighties and into the nineties have actually stuck in my brain. There may well have been more, but they clearly weren't significant enough for me to remember (with the absurd idea of allowing lifting in the lineout being introduced subsequent to my first "retirement").

It's all very different today. World Rugby probably think they are helping to improve the game - and they probably have a department whose raison d'être is simply to keep on churning out these "improvements" - but in reality all this does is to confuse. And if the players and coaches are struggling to keep up, then what chance the general public?

Rugby is complex enough without complicating things further. Enough is enough - I say to World Rugby that it is time to stop tinkering, to focus on ensuring existing laws are properly policed and to give the public time and opportunity to understand the game.

And to give us poor beleaguered coaches a break!

Here endeth the lesson.
Posted by TotalFlanker at 07:40 No comments: Links to this post