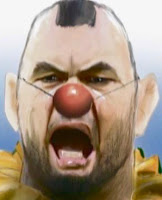 So Michael Cheika appears to be in a spot of bother over his behaviour at Twickenham on Saturday. I understand that he felt/feels hard done by the fact that the Aussies hardly got the rub of the green against England - but is childish petulance really the answer?

Cheika's ire appeared to be directed towards referee Ben O'Keefe who denied Australia a couple of tries having consulted with the TMO. Much has been said about the possible emasculation of referees by over-use of the TMO and, while I do have some sympathy with that view (and, indeed, have expressed something similar myself previously), what Saturday showed is that the most important thing is that ultimately the correct decisions are made.

Imagine the controversy had Ben O'Keefe not checked the video replays and made the wrong calls...
Posted by TotalFlanker at 23:23