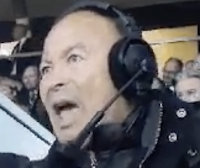 Ok, so on Saturday England were a bit lacklustre against Argentina, who rather inconveniently didn’t just roll over and allow England to run through their playbook.

It wasn’t great, but neither was it the disaster being painted by many commentators. Take young Sam Underhill for instance. Twenty-odd tackles on his Twickenham debut in an immense defensive effort and yet apparently he doesn’t get involved enough in the attack!

Put in context, 2 months ago New Zealand beat Argentina by 39-22 and by 36-10. So an England win by 21-8, although in many ways underwhelming, was still a decent victory against difficult and obdurate opponents who, although they’ve struggled for results recently, are always ultra-competitive.

Expectations that England were somehow going to run up a cricket score were as disrespectful as they were unrealistic.

I suggest we all get a grip.
Posted by TotalFlanker at 08:02