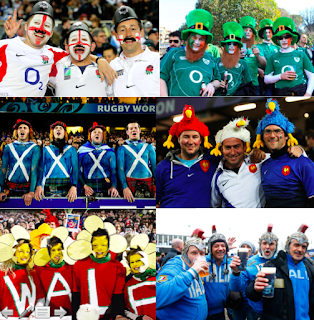 Woah. Hands up, I didn't see that coming.

But first, Friday night in Marseilles where watching France vs Italy was like watching two bald men fighting over a comb. When Mathieu Bastareaud is the best player on the pitch you know you've got problems. That said, a French victory sets things up nicely for Paris in a fortnight.

To Dublin, where the quality was a notch or several higher and where Wales very nearly pulled off an unlikely upset. Perhaps if Dan Biggar spent as much energy on his game as he does haranguing the referee...just saying. Ireland were largely impressive but will need to improve again against the Scots.

And finally, Murrayfield. Fair play to Scotland - aggressive, committed, inventive and clinical - all things that a ponderous and complacent England were not. The inquest into England's performance can wait until another day - suffice to say huge congratulations to Scotland for a well deserved victory.

TF team of the week:

Dan Biggar is an infuriating prick to watch. No matter how well he plays I just want him to fail miserably. I can't think of any single player who's done more to bring the worst of wendyball backchat into our wonderful and noble sport. Referees need to start making a proper example of him, before this sort of thing inevitably takes hold. A simple three-step process would shut him up in no time:
1. First time he talks, remind him to only address the ref via his captain;
2. If he does it again, march his whole team back 10m - such an amazing tool for a ref to have in his bag, I cannot fathom why it's gone out of fashion;
3. Any more backchat, get the old yellow card out. That's what it's there for, bloody well use it!