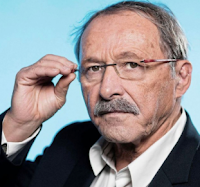 You have to hand it to France coach Jacques Brunel - he has fully bought in to the methodology of the chaos theory with his latest team selection.

Having selected a 19 year old rookie at 10 to face Ireland last week, this week he recalls 32 year old Lionel Beauxis to play fly half against Scotland, a player who last played for France in the 2012 Six Nations (when he featured prominently in this blog's Six Nations Chumps XV).

He also drops Kevin Gourdon, probably France's best forward over the past 12 months, and recalls Louis Picamoles, France's most effective ball carrier for the last 10 years, to take up a place on the bench.

If such eccentricity wasn't enough, rumours that Brunel plans to call up Serge Blanco (59), Jean-Pierre Rives (65) and 74 year old Walter Spanghero have yet to be denied by the FFR.