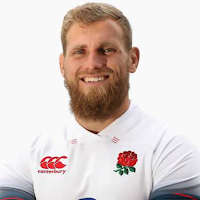 I truly hope that the rumours that flanker Brad Shields is due to start in the second row for England in Bloemfontein on Saturday, are just that - rumours.

If true I'm not sure what it says about England's selection policy.

Eddie Jones has selected four locks for the tour, one of whom (Joe Launchbury) has been injured. So that leaves three locks, two of whom should start and the other used as a bench option. It's not rocket science.

From shoehorning three second rowers into the starting XV for the Six Nations to just picking one specialist lock to face South Africa would just be perverse.

If Shields does play he should replace the pedestrian Chris Robshaw.

Selecting players out of position, however, appears increasingly to be a Jones habit.

And it's worked so well so far, hasn't it?

[UPDATE: It appears that Joe Launchbury is fit for selection for the 2nd Test after all. Move along now, nothing to see here...]
Posted by TotalFlanker at 12:07