Question: who is England's most capped rugby player of all time?
Answer: England Women's prop Rochelle "Rocky" Clark, who has announced her retirement from the international game having won 137 caps.
Clark, who will continue to play for Wasps in the Premier 15s next season as well as coach Chesham Stags, also retires as the most capped female international player of all time.
Legend is a word often bandied about indiscriminately, but in this case it is wholly deserved.
Posted by TotalFlanker at 09:34 No comments: Links to this post

Cheating on a Saturday 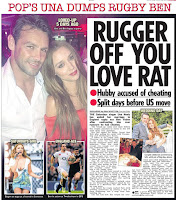 It’s been a little while since former Saints and England fullback Ben Foden made the news.

And, while we should be talking about the player’s impending move to Major League Rugby team Rugby United New York, unfortunately Foden is instead hitting the headlines for all the wrong reasons.

It’s not often that rugby players are featured in the red tops, but Foden has managed it with the revelations in The Sun that his marriage to former Saturdays singer, Una Healy, is over following the former Saint’s affair with a “26 year old PR girl”.

The Sun has, in its own inimitable way, branded Foden a “love-rat.”

I have a better word.

Wazzock.
Posted by TotalFlanker at 12:10 No comments: Links to this post 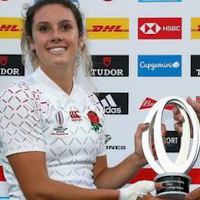 Another talking point from the Rugby World Cup Sevens last weekend was the failure of the (professional) England Women's team to progress beyond the first round of the competition after losing their opening match to (part-time) Ireland.

Yes, they went on to lift the Challenge Trophy, but finishing the tournament in 9th place overall was arguably a poor return on the investment made by the RFU in the sevens squad and must surely call into question  RFU's decision to prioritise the resourcing of the sevens programme at the expense of the 15-a-side game?
Posted by TotalFlanker at 00:01 No comments: Links to this post

It seems, however, that New Zealand's victories (male and female) in San Francisco have been largely overshadowed by the alleged off-field assault by Samoa's Gordon Langkilde on three Welsh players which left all three with facial injuries and forced Tom Williams out of the competition with "broken facial bones".

Unsurprisingly the Samoan has been suspended by World Rugby pending investigation but that could be the least of his problems having also been arrested by San Francisco Police and charged with one count of aggravated assault and three counts of battery causing serious bodily injury.

Langkilde, who has pleaded not guilty, faces up to four years in prison if convicted.

We await developments.
Posted by TotalFlanker at 08:11 No comments: Links to this post 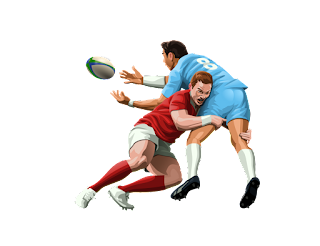 The RFU should be applauded for the introduction of a trial to lower the height of a legal tackle in rugby next season as part of efforts to make the game safer.
The height of a legal tackle will now need to be below the armpits rather than the line of the shoulders as is currently the case.
Admittedly the the trial will be  limited to the Championship Cup competition, but at least it's a start and gives the powers that be the opportunity to assess the impact of lowering the height of the tackle on brain injuries and concussion.
Posted by TotalFlanker at 12:06 No comments: Links to this post

I was sorry to hear the news that injury has forced Wales and Lions skipper Sam Warburton to retire from rugby at the tender age of 29.

Fabulous player, inspirational leader and all round good egg - only shame is that he decided to be Welsh (despite English parentage). Just think how good England would have been with him at 7.

What ever he decides to do next I am sure he will be successful and wish him all the best...
Posted by TotalFlanker at 00:11 1 comment: Links to this post

As we're on the subject of Touch Rugby, the European Touch Rugby Championships is currently live on the BBC iPlayer.

Posted by TotalFlanker at 12:10 No comments: Links to this post 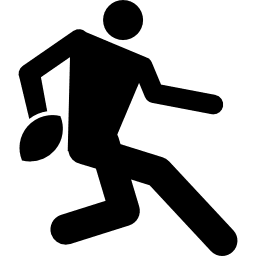 Come on, admit it, you're just dying to know how my touch rugby season has been progressing, haven't you?

Well, here it is anyway, a quick summary of the exploits of Dave's Dad's Dog's Dead in the Chesham Touch Premiership of 2018...

Last night saw the culmination of our season in a game in which unfortunately DDDD slumped to a comprehensive thumping at the hands of the Chiltern Barbarians, meaning that we finished in 3rd (or, as I like to call it, joint 2nd) place in the league.

The result was a bit of shame as, until last night, we had remained competitive in all of our games despite a campaign fragmented by a recent football tournament in Russia, an injury to our skipper and by the demands (on some) of pre-season rugby training, which meant that the team was rarely at full strength during the second half of the season and at times even struggled to raise a quorum.

There was also a realisation at last night's post-match inquest - over beer and pizza - that the collective age of our squad, with several of us now in our 50s, was maybe beginning to take its toll, especially when faced - as was more often the case - with teams stacked with young, fit, speedy men.

Hardly a level playing field then, but on the upside we still finished with a record of won 7 and lost 3,  on occasion we played some great touch and we made sure that we always (or, nearly always) enjoyed ourselves. And we always had a beer after the game. And the pizza was delicious.

As for yours truly, I did have my moments, albeit perhaps they were fewer and farther between than I would have liked . At the bar after the game last night there was talk of maybe cutting our youngsters free next summer to play competitively while we oldies play purely for fun in the more social Championship division. I suspect that in reality, however, by next summer the competitive juices will be flowing again and our egos will begin attempting once more to persuade our bodies to perform feats well beyond their capabilities.

I’m sure Welsh rugby fans will have been delighted at the announcement that Scarlets head coach Wayne Pivac will succeed Warren Gatland as head coach of Wales after the 2019 World Cup.

Actually, given the attractive, attacking style in which the Scarlets play, I’m pretty confident that there will be many in Wales who wish that Pivac could start immediately.

In theory succession planning is a good thing, of course, but it will also be interesting to observe the effect on the Welsh players – how will the knowledge that both Warren Gatland and Rob Howley will not be continuing beyond the World Cup affect attitude and performances?

Watch this space.
Posted by TotalFlanker at 07:49 No comments: Links to this post

Rugby in the USA - a Giant awakens? 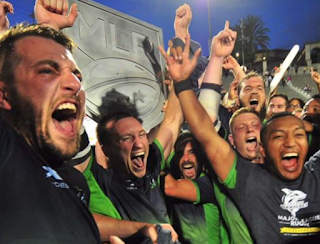 Big congrats to the Seattle Seawolves, winners of the inaugural Major League Rugby title in the United States, beating the Glendale Raptors in the final in San Diego this weekend.

Rugby appears to be on the up in the USA, what with the national team’s victory over Scotland last month, another top six finish in the World Sevens Series and now a successful first MLR season featuring teams from Austin, Houston, New Orleans, San Diego and Salt Lake City as well as the 2 finalists. And with teams from New York and Los Angeles set to join in 2019, professional/semi-professional rugby appears finally to be getting a foothold in the States.

One fly in the ointment is that MLR remains unsanctioned by USA Rugby, perhaps understandably cautious following the relatively recent collapse of PRO Rugby – its first venture into the professional game - and the subsequent financial fallout.

Neverthless there’s little doubt that there remains a huge amount of untapped rugby potential, both playing and commercial, in the US. Could the giant be beginning to stir?
Posted by TotalFlanker at 01:01 No comments: Links to this post

Football isn’t the only thing coming home following the announcement that Chris Ashton will be playing his rugby for Sale Sharks next season.

According to Toulon owner Mourad Boudjellal the French club released Ashton from his contract for family reasons – but all the indications are that his move to the North West is an attempt to resurrect his England career in time for the World Cup.

Given his try-scoring prowess and the improvements to his game at Toulon, he will be an undoubted asset to Sale, but whether he can leapfrog the likes of Day, May, Nowell, Watson or Brown in the England pecking order remains to be seen.

Whether he can leave behind his history of wazzockry will also be interesting to see. A start would be to ditch the ridiculous swallow dive.

Some of you may have noticed that there's a minor sporting event going on in Russia at the moment which appears largely to consist of young men theatrically throwing themselves to the floor as their team mates brandish imaginary cards, excruciatingly painful injuries clearing up in a matter of seconds, and a television replay decision system (VAR, What is it good for? Absolutely Nothing) which appears unable to spot blatant cases of assault and battery in the penalty area. 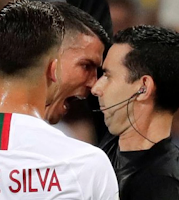 Furthermore, this little tournament - which has already deprived my Touch Rugby team of players for tomorrow evening's match (I despair of the youth of today) - has also provided us with several fine examples of how to show the utmost respect to match officials, culminating in this edifying little scene where Cristiano Ronaldo (so-called Greatest of All Time, ahem) was observed screaming obscenities into the face of the poor referee - an offence which earned CR7 a paltry yellow card.

As the so-called (or is that self-proclaimed) G.O.A.T, Ronaldo obviously has no concept of setting a proper example to the next generation or how difficult it now might be for the already beleaguered referees of grassroots football.

I know that I have raised concerns in the past about the lack of respect creeping into rugby and the last thing I wish to do is come across as all holier than thou, but at least we are not plagued by behaviour quite so appalling as this.

Nor, it is to be hoped, will we ever be.

Posted by TotalFlanker at 12:01 No comments: Links to this post

Loving this pic of Owen Farrell setting off on his stag do. Looks happy, doesn't he? 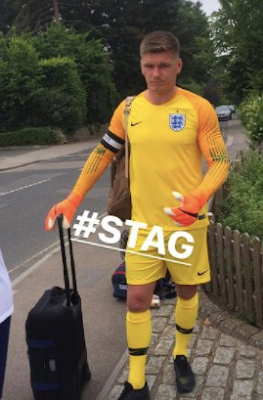 Apparently the rest of the party were there dressed as outfield players - would love to see photos of that! 😃
Posted by TotalFlanker at 10:51 No comments: Links to this post