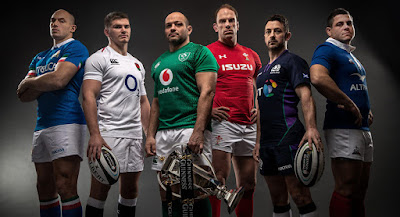 France 19-24 Wales
I mentioned in my Six Nations preview the old cliché that you never know which France will turn up, but Les Bleus took this to another level on Friday evening, such was their advanced degree of schizophrenia. Warren Gatland may claim that the Welsh have "forgotten how to lose" but it is near on impossible to lose when the opposition hand the game to you on a plate. It was almost as if the French team had been on to the bookies at half-time and bet their match fees on a Welsh victory.

Scotland 33-20 Italy
I predicted that the Italians would "give it a right good go" and they did - well, at least they did for the last 15 minutes, by which time Scotland had the game wrapped up without having to be anything other than competent. As usual the Scots looked good in parts and distinctly ordinary in others. But it was a comfortable win first up, so the Scots are still very much in with a shout.

Ireland 20-32 England
Woah. Hand on heart, I was not expecting a performance by England of anywhere near the intensity and accuracy on display from the men in white in Dublin. Ireland tried to play their normal high tempo, physical game but were smashed time and time again behind the gain line by the rabid English defence. If this is the blueprint for the foreseeable future it's going to take a bloody good team to overcome Eddie's boys.