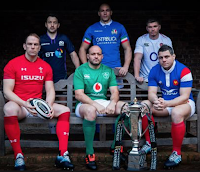 So last week (surprise, surprise) I wasn't quite on the money with my predictions. France should have beaten Wales but blew it, Scotland did manage a reasonably comfortable victory against Italy and England performed well above expectations against Ireland.

Scotland v Ireland
If Scotland can replicate the physicality shown by England last week then they'll be in with a shout against Ireland. Although I do expect the Irish to be far more successful on the gainline this week, you can't discount a vibrant Scottish attack (assuming their pack can secure enough possession) and, although the weather forecast is not great, if Scotland can get their all-court game functioning I can see them sneaking this one by 6 points.

Italy v Wales
Warren Gatland, quite rightly, talks about how momentum can propel a team forward to win the Championship. And so, with momentum having shifted  Wales' way during a remarkable second half last week in Paris, Gatland has now made 10 changes to his team to face Italy who, incidentally, finished strongly at Murrayfield. It's either a brave or foolish move by Gatland as Italy nearly always perform well in their first home game of the tournament. Wales to win, I think, but only just - possibly by less than 7.

England v France
Will the real France please declare themselves. Outstanding the in the first half last week, if the French find their rhythm early doors then England will be in for a long afternoon. Fortunately, for the most part (South Africa in November aside), Eddie Jones seems to have his team coming out of the blocks pretty quickly these days and early scores against Les Bleus could bite deep into the French psyche. On that basis I'm going for England by 9-12 points.
Posted by TotalFlanker at 08:08