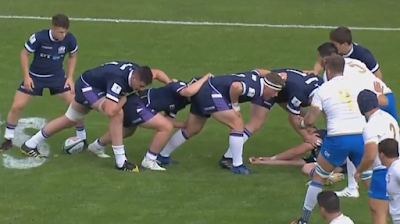 The art of box kicking - of kicking from the base of a ruck, hanging it high for your players to chase and (hopefully) regain possession, has in recent years become an integral part of any aspiring scrum half's repertoire.

Whereas previously such a tactic may have been used sparingly to catch out the opposition, these days it is very much the default tactic for many teams.

Firstly, as scrum half, you get your forwards to win the ruck. Simple enough.

And then, you slow down. You slow everything right down. Put the kettle on, check your text messages, whatever. Have a look around. If there is any danger of any opposition player getting within two metres of you, call another player into the ruck, then another, then another in a nice long crocodile-line, moving you further and further back from danger.

And then, only then, when you are good and ready and when all 29 other players on the pitch plus the referee, touch judges, coaches, replacements and spectators have all had a wee snooze, launch the ball skywards, inviting your players to chase it.

Things to bear in mind:


To be honest, if I could change one thing about rugby right now it would be to limit the use of the box kick. As a  bare minimum referees should be instructed to declare the ball available and issue the "use it" command much earlier and then strictly enforce the five second rule. And once the ball is available teams should not be allowed to add extra players to the ruck.

And I would be tempted to go even further. A radical solution would be to insist that from rucks and mauls the ball must be passed at least once before it can be kicked. You never know - it might be worth a go...?

Still, right now none of this is your problem. Just keep taking your time and boring the pants off everyone...
Posted by TotalFlanker at 07:57