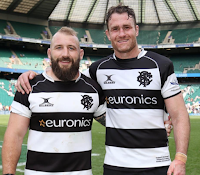 From time to time I have questioned the relevance of Barbarians rugby in the modern professional game.

I'm happy to say that I'm starting to think I was wrong, as it is becoming increasingly clear that the annual end of season BaaBaas game against England at Twickenham is beginning to establish a meaningful toe-hold in the rugby calendar.

Not only does the fixture allow England to take a look at some exciting emerging talent - and Ben Curry, Alex Dombrandt, Marcus Smith and Joe Marchant certainly did their future chances no harm at all at Twickenham on Sunday - but it is also apparent just how much playing for the Barbarians means to some of the players.

Take Joe Marler, for instance, who declared last week to be "the best week I’ve had playing professional rugby because it was very unprofessional." Or the retiring James Horwill, who claimed the week was "arguably one of the most enjoyable of my career."

The fact that top players can come together, have a few beers and play rugby for the sheer enjoyment of it and, in doing so, re-discover why they began playing rugby in the first place is, in itself, a pretty unique proposition.

This, coupled with the fact that the Barbarians have also embraced women's rugby - with the Barbarians women gracing Twickenham for the first time on Sunday - demonstrates that, not only may there be a place for the BaaBaas in the rugby calendar, but that the Barbarians may actually be the antidote to modern professional rugby.
Posted by TotalFlanker at 00:01