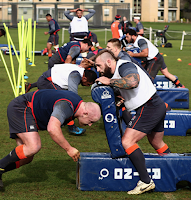 With injury concerns hanging over a number of his England squad, Eddie Jones has been forced to include 3 players (Joe Marchant, Matt Kvesic, Charlie Ewels) in his 23 for tonight's warm-up against Italy who are not amongst the 31 names selected to play in the World Cup in Japan.

Which begs the question: is 31 the right number of players for a World Cup squad?

Given the length of the tournament, the number of games and the attritional nature of the modern game, I think the answer is probably a resounding NO.

None of the major playing nations would embark on an overseas tour - featuring a maximum of 3 or 4 games - with only a 31-man squad. Any yet they are expected to go to a World Cup limited in this way.

England, like other teams, have decided to go to Japan with only 2 scrum halves and 2 specialist tight head props. Both decisions carry obvious risks - and yet we must acknowledge that, given the 31-player limit, sacrifices have to be made and risks have to be taken somewhere within the squad.

This hardly chimes with World Rugby's efforts to make the game safer for players as inevitably teams will be forced on occasion to send out players to play who are not fully fit, thus putting their health and welfare at risk. I have no doubt that players will suffer injuries as a consequence.

It's too late for Japan, but if World Rugby are serious about player welfare they will consider allowing teams to increase the squad size to, say, 35 players for future tournaments.
Posted by TotalFlanker at 10:39