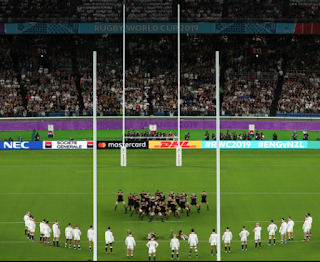 Much has been made this week of England being fined a "four figure sum" for their V-shaped response to New Zealand's haka last Saturday.

I'm sure the RFU can afford it but I honestly haven't seen a single comment, whether from New Zealanders or otherwise, where anyone had a problem with the England team's actions.

Other than World Rugby, of course, who continue impose ludicrous, artificial protocols on how the Maori challenge ought to be received.

Contrary to popular belief I have no issue whatsoever with the All Blacks performing their haka - it is often great theatre (last Saturday being a case in point).

But for World Rugby to continue to legislate on how the opposition should behave during this choreographed showpiece is just silly.
Posted by TotalFlanker at 07:14

The Haka (or the haka.) There is a difference.
The reason for the fine was given for breaking the tournament rules to respect “Cultural Challenges.” But to say it is a New Zealand “Cultural issue” is to roll over the history of the Moari nation, from whom this ritual has been Culturally appropriated. This only became official in law in 2009, after a legal challenge to the rights of use was settled between New Zealand and various Moari tribes
It’s use as a Sporting challenge was fist noted in 1888 when performed by a native (Moari) football team en- tour in the UK.
TBH a four-figure sum is preferable (even if unfair) because the alternative I have heard in NZ is that any man crossing the line is automatically yellow carded for their own protection. The man that crosses the line in terms of a haka presents himself to settle the score by way of a single champion in a fight to the death. Not an ideal way to start a match with the “Champion” likely to be subjected to the worst kinds of shoulder charging off the ball incidents right from the whistle!
It has always been around even when Capt. James Hook was making his Scientific surveys of the Pacific, and is described as a postural dance and chant in which every physical means of expression is used to convey every emotion you are feeling in the most forceful vehement manner possible. It can be a greeting to visitors, or it can be a declaration of war. So, the loud final shout in childbirth, or Tarzan’s ululation might also be interpreted as a haka.
If greeting is meant or terms of a military engagement between tribes than a small symbolic present, a flower or a shell, may be given as acceptance, so an underdog might roll on the ground submissively, whereas an aggressive haka such as The Haka is most appropriately met with an aggressive response such as a snarl, or bearing of teeth exactly as was done by Owen Farrell.
“The Haka…”
Ka Mate is the most “famous” or strongest of the various iterations of the Haka and apparently the New Zealand team reserve this one for teams that they believe are strong enough to deserve the honour. So, not receiving this is in itself a bit of a snub, but this is the basic story…
Tr Rauparaha was in trouble. The enemy were on his heels and he had nowhere to hide. Fortuitously he came upon the village of a friendly tribe and begged for sanctuary. The friendly Chieftain suggested he should hide underneath the Mrs Chieftains seat and then the whole tribe kept stum while his enemy searched the village, and not finding Te Rapu, were successfully told “He went that-a-way!” No one looked under Mrs Chieftain’s seat because to do such a thing would have been disrespectful
Having been convinced he would die he could now be confident he would live, and unable to contain himself, he burst out of hiding and performed his famous haka, “I Di I Die, I Live, Live,” etc. (In effect a huge Phew,) but at the end of the day I can only condense this to saying that in modern terms, he escaped the final battle by hiding in the girls changing room.

Thanks for the social anthropology lecture. I am sure there is a point hidden in there. Beats me if I can spot what it is though. If WR are going to privelige the ABs to dance around and stick their tongues out then it is a bit much to penalise the opposition for any response that doesn't involve indecency or direct violence.