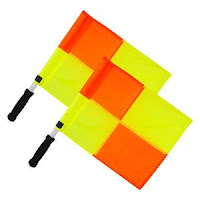 Yesterday morning I, as usual, ran touch for my son's rugby team - away at a club that shall remain nameless.

Now, normally when I'm flag-waving I share a level of friendly and light-hearted banter with those on the sidelines - opposition coaches, parents, spectators etc - and, at least in the early part of yesterday's match, it was business as usual.

As the match progressed, however, and as it became increasingly obvious that the home team were likely to lose a closely-fought contest, a combination of opposition parents plus boys who were supposedly on the bench ( I say "boys" but at Under 18 level that's not really the case), grew increasingly loud and aggressive, patrolling up and down the touchline, criticising refereeing decisions, abusing our team and and winding up their own boys playing on the pitch.

Not far short of a baying mob, to be honest, and the final act - me raising my flag to indicate a player being pushed into touch - was met also met by a torrent of abuse.

Our boys, to be fair, kept their composure and saw out the win, but it was a thoroughly unpleasant and depressing experience, at least for me.

The worst part, I think, was that the coaches on the sidelines, whilst not actively involved, did nothing to discourage behaviour which does nothing for their club's reputation. I know for certain that similar behaviour from our boys (or their parents) simply would not be tolerated.

So much for the spirit of rugby...
Posted by TotalFlanker at 12:00

I would be horrified if such behaviour occurred at my club, however not all clubs have the same attitude towards these kind of incidents.

It really isn't acceptable at any level.