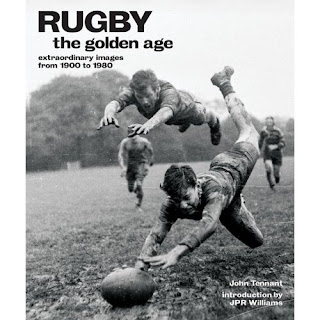 Here's a must for every self-respecting coffee table - RUGBY: THE GOLDEN AGE by John Tennant. It's a superb book containing over 300 black & white images taken between 1900 and 1980, showcasing a variety of aspects of both Union and League teams, players, stadia and fans.


The book's qualities are probably best summed up by the official blurb:


"Rugby: The Golden Age is a unique collection of over 300 images from the last century, looking behind the drop goals and the mud-caked scrums to the core of a sport that is bloodthirsty, punishing, strategic and exhilarating all at the same time. The players who make the action are seen at repose, the helpers who are largely unnoticed at a game are framed in detail at their busiest and most intense, the stadiums that we usually think of as packed with supporters are seen empty, giving a flavour of the atmosphere and the passion behind the game that ordinary sporting photographs do not consider. Focusing on both the sport and the photography of the era it covers, Rugby: The Golden Age is a fresh take on the game, showing not just how the sport has developed, but why it continues to be loved and followed by so many people worldwide."


I guess the idea is to dip into the book from time to time but I'd recommend that you DON'T buy it unless you're prepared to ignore friends and family, forego all sustenance, deny yourself sleep and immerse yourself in all 379 pages at the first sitting. It really is that fascinating (well, at least it is for a rugby geek like me).
Posted by Total Flanker at 15:12