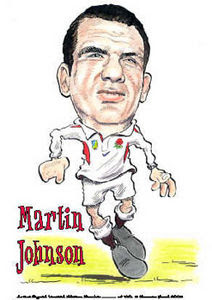 In a recent petition on the UK government’s E-Petition website 291 people, including yours truly, signed up in support of the following motion:

“We the undersigned petition the Prime Minister to award Martin Johnson a Knighthood”.

While 291 people out of a population of more than 60 million might not sound much it was more, for instance, than achieved by the following motions:

…none of which seem particularly outrageous or fanciful.

So, does Martin Johnson deserve a knighthood? Well, given that we appear to be stuck with an increasingly irrelevant royal family and that we insist on giving out gongs each year to all and sundry merely because they do their jobs properly, I don’t see why not. In any event it appears that a few quid bunged into the Labour party coffers can buy you a peerage these days so yeah, have a knighthood Martin and good luck to you.

After all, taking a meritocratic stance, Johnno was the finest forward of his generation (and we are, naturally, all willing to turn a blind eye to the odd disciplinary transgression), he was the captain and driving force behind the England World Cup triumph in 2003 and even now is a fine ambassador for the game (or at least for the brands he represents). If Sir Bobby Charlton and Sir Geoff Hurst were deserving cases then why not the captain of an English World Cup winning rugby team?

Johnno surely had more influence over England’s success than Sir Clive Woodward ever did, something with which former Wales coach and current New Zealand assistant coach Steve Hansen appeared to agree when, in a tit-for-tat war of words with the then Lions coach Woodward in 2005, he said:


"I would also suggest that perhaps Clive has got Martin Johnson's knighthood. In my eyes that guy is the most influential player the game has seen for a long time and if anyone deserved to get a knighthood it was Johnno, not the coach."


Mind you, the Irish President Mary McAleese might have something to say about it having been made to walk on the grass (horror of horrors) when Johnno refused to move his team before the anthems for the Grand Slam decider at Lansdowne Road in 2003. However, putting that minor diplomatic incident to one side, what swings it for me is the current rumour circulating that a certain David Beckham’s name is seriously being considered for a knighthood, in which case we all might as well give up and go home. Let's face it, if English sporting failures are going to get knighted there’s going to be one hell of a queue.

So that’s settled then – a knighthood for Johnno. Time to turn to the next item on the agenda:
“We the undersigned petition the Prime Minister to make Jeremy Clarkson Prime Minister” (7,385 signatures so far!!)
Posted by Total Flanker at 19:37