Sometimes when we Touch... 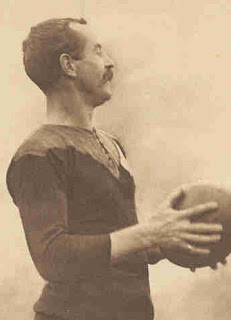 Another Tuesday evening, another game of Touch and another stuffing. I hate to say it but as the weeks progress we appear to be getting worse. The good news is that this week we only conceded 11 tries. The bad news is that we only scored 1.

Once again we were pretty shambolic in both attack and defence, although personally I felt I contributed more than I did last week, at least managing a break and pass to set up our one try after about 5 minutes. That reduced the score to 2-1 at that point, although obviously that’s where we peaked. There were also a couple of other neat moments but what we really lack in attack is sheer pace (something the other teams seem to have in abundance). There was one kid on the other team tonight (and when I say kid I mean he was probably about 9 or 10) who had a fantastic burst of speed which saw him carve through our ranks on more than one occasion. Not that carving through our ranks was that difficult given our inability to move up as a line – your average mutt would have been very proud of our dog-legged strategy.

Still, for some reason it was nowhere near as demoralising as last week’s efforts – at least I felt I tried to contribute albeit with a limited amount of success. I guess it’s just a question of me lowering my expectations, enjoying the game for what it is and having a beer afterwards.

And there’s always next week…
Posted by Total Flanker at 09:05