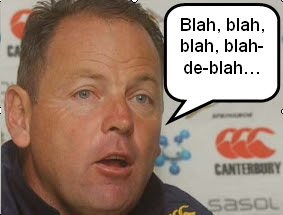 Last week I said how pleased I was that the IRB had decided to clamp down on "bleating rugby coaches" who use the media to try to undermine match officials.
Well, here's their chance. South Africa's Jake White has, apparently, asked the IRB to assist in ensuring that England's Mark Regan stands in the correct position at lineouts when England play South Africa in the World Cup.
How do we know this? Well, because Jakey-boy has helpfully told the media that he's emailed IRB referee supremo Paddy O'Brien, saying how concerned he is about referee Joel Jutge.
" That's why I want to put pressure on Jutge, because Regan can't be allowed to get away with that, " White said.
So, let's get this straight. By writing to Paddy O'Brien, presumably White's playing it by the book and following accepted procedure. However, the fact that he's also gone public with his concerns surely undermines that and is exactly the sort of behaviour that O'Brien said would not be tolerated. If you ask me this smacks of Eddie Jones' influence and the IRB should jump on it from a height unless they want to see more of the same leading up to and during the tournament.
The fact that White also labelled the English performance "boring" is also a good sign that England might be on the right rack.
Jake White Paddy O'Brien referee rugby Rugby World Cup

Cricket said…
Greetings!
"boring" is also a good sign that England might be on the right rack...
Interesting point of you...What about developing it into a story on Sportingo...
Visit sportingo and join our authors' community!