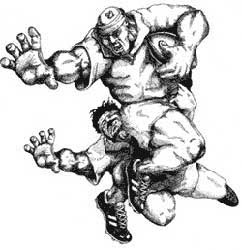 Back to club training last night having missed last Tuesday's session to nurse various bumps and bruises incurred playing the previous Saturday. It still seems surreal that I've actually played a full game of rugby again after all this time but at least it meant that I didn't feel quite so much of a fraud turning up at training.
Last night's session got off to a somewhat delayed start after a problem with the electrics meant that it took a while to get the temporary floodlights to work. They don't light up very much of the pitch at the best of times, but training in pitch darkness wasn't an option (although a few optimists were launching high kicks towards each other in the gloom while we waited for the lights to work).
Numbers were also down last night. Apparently quite a few of the club have been struck down by a virus, which goes some way to explaining some of the absences. It was also bitterly cold, which probably accounts for the rest.
Once we got ourselves going though it was a good session with plenty of work and precious little standing about. The main bulk of the session was spent in groups hitting tackle bags and then having to defend three-on-two situations - and not only was it really hard work, it also highlighted to me just how poor my tackling is these days.
I wouldn't say that, even at my peak, I was ever a really big tackler, but I generally made my tackles count and brought my man down. The intervening years, however, appear to have led to crisis in confidence and I was disappointed to miss a couple I really should have made last night. I don't remember missing any in the match I played last week, but equally I don't recall making any "good" tackles - by which I mean executing solid technique and going low. It's certainly something I'm going to have to work on, both in terms of technique and also in terms of mindset...
Posted by Total Flanker at 10:02

Nice blog you have here. I've written a testimonial/tribute article on probably one of rugby greatest player on my blog.

Though the RWC is over, always keep its flame alive