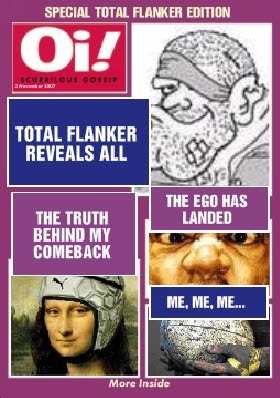 Cancel the red carpet, call off the paparazzi, it looks like my new-found international fame is going to be somewhat short-lived.

As previously reported, this humble little blog has been referred to in the online section of The Times, specifically in Hamish Henry's "Best of the Web" section which, in turn, is a sub-section of the "Upfront Rugby" feature - so you can see just how major-league I've now become ;) .

However, the introduction to this week's column (and thanks again for the mention, Hamish) reads: "Our resident surfer takes one final look at rugby's internet persona," which does suggest that my career as a media darling is about to be holed below the waterline.

If true, not only is this a potentially catastrophic blow to my growing ego, it's also a shame that we shall in future be denied this very useful route to some of the more unusual and amusing rugby content out there in the ether, presumably because the editorial team at The Times believes that the end of the 2007 Rugby World Cup will mean the end of all such content?

So, if you're reading this Hamish (although why would you if you're no longer being paid to do so?!), it would be great if you could post a comment on here to clarify if indeed the "Best of the Web" is being mothballed and, if so, the rationale behind it.

I, meanwhile, will await the call from the producers of Celebrity Big Brother.
Posted by Total Flanker at 10:41