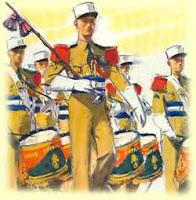 s on this blog I have, with my tongue firmly implanted in my cheek it must be said, suggested that the talents of Lesley "the Volcano" Vainikolo be utilised by England when he qualifies to play for England on residency grounds in January.

Vainikolo, who is currently the top try scorer in the English Premiership (albeit with all 5 of his tries coming in his first match), has expressed an interest in joining the English cause despite having been born in New Zealand to Tongan parents, and he is not the only foreign player plying his trade in England who has been touted as a possible addition to the national side.

As well as Vainikolo, the likes of Wasps' Riki Flutey and Saracens' Glen Jackson could, in the next few months, have the opportunity to pledge their allegiance to the English cause on residency grounds and they all have their supporters in the press.

I guess there are three questions we need to ask when considering whether this "foreign legion" should be selected for England:

In the case of Vainikolo, the first question is relatively easy to answer. He is still learning the

ropes as far as Rugby Union is concerned but the potential of this powerful giant is just awesome. England have some decent wings in their ranks at the moment but none who could make the sort of impact that Vainikolo could. The second question is, in this case, perhaps more pertinent. While expressing an interest in England, Vainikolo has also declared that he'd be interested in representing Tonga. He needs to make a commitment and declare one way or the other.

As regards Riki Flutey, his current form for Wasps, where he has been cutting opposition defences

to ribbons from inside centre, suggests an affirmative answer to the first question, although the fact that London Irish didn't fight tooth and nail to retain his services at the end of last season suggests that perhaps we need to see this form sustained over a period of time before making a definitive judgement. After all, it wasn't that long ago that Flutey's fellow-Wasp and Kiwi, Mark Van Gisbergen, was being touted as the answer to the problematical England no. 15 shirt, until a loss of form and confidence put paid to that idea. The second question is more problematical - as a Maori from New Zealand, Flutey has declared that he has no interest in an England shirt, quite rightly having ambitions one day to be an All Black. If this is what he wants it seems non-sensical to me to try to persuade him otherwise, no matter how good he is.

As for Glen Jackson, he's been one of the Premeirship's most consistent performers at fly h

alf over the past couple of seasons and possibly possesses a more all-round complete game than any of the current England pretenders, including Saint Jonny. Whether including him in the England set-up would possibly stunt the development of young England wannabes like Ryan Lamb, Danny Cipriani or Shane Geraghty is a question for a different debate, but it's clear to me that Jackson is good enough to be given an opportunity, especially as he has unequivocally declared that he wants to play for England.

All of which brings me to the third question - is it right and proper for players with no English connection at all to represent England? I admit that this is a question that troubles me as I often fail to grasp how a player can have sufficient pride in a country's shirt if he doesn't "belong" to that country. In other words, wanting to play for a country isn't enough - my instinct is that a player has to "feel" English to play for England. It's more than possible that I'm being terribly naive here, and it's not as if England hasn't included obviously "foreign" players in the past - Mike Catt, Matt Stevens and Perry Freshwater being of the most recent vintage (although all, it must said, with an English parental/grandparental connection).

We (or at least certain Northern Hemisphere journalists) also have great fun in taking the moral high-ground in berating New Zealand for "plundering" the Pacific Islands, although it's beyond me how anyone can honestly object to someone playing for the All Blacks who was born in New Zealand to e.g. Samoan parents or taken to New Zealand as a child by parents looking for a better life. Certainly any objections we do have to Pacific Islanders wearing the black shirt will fly out of the window if England line up in the near future with Messrs Jackson, Vainikolo and Flutey wearing the white 10, 11 and 12 shirts respectively.

I guess the reality of the situation is that "rules is rules" so that, if a player is qualified for England then, as long as questions 1 and 2 above are satisfied, there's no reason why he shouldn't be picked. Other countries seem to have no qualms in this respect and, with more and more foreign players plying their trade in the English league and qualifying for England on residency grounds, it's certainly an issue that isn't likely to go away.

Anonymous said...
This comment has been removed by a blog administrator.
5 February 2008 at 16:01