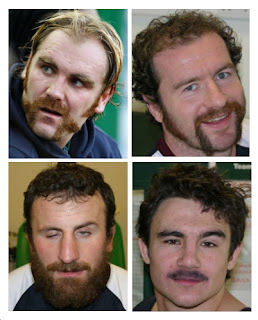 It seems that rugby's return to the halcyon days of the hirsute seventies, when the moustaches of Mervyn Davies and Sid Going and the beards of Ray Gravell and Derek Quinnell (amongst many, many others) graced our pitches, has really caught the rugby public's imagination with Andy Goode's magnificent moustache being the talk of many a rugby forum.

Time for a facial hair update then, and it is Goode's Leicester Tigers who continue to set the pace with their "Grow a Mo for Hambo" campaign, in aid of the Matt Hampson Trust. Goode's effort wins hands down so far in terms of creativity (if only he showed the same imagination on the pitch), but the efforts of Geordan Murphy and Luke Abraham deserve an honourable mention, while George Chuter's beginning to look like some crazed survivor of a shipwreck washed up on a desert island. The most sinister of all though is the new look sported by Harry Ellis - he may be out for the whole of the season while he recovers from a serious knee injury, but that's no excuse for looking like something you wouldn't want your children to see before they went to bed.
With the results of the Newcastle Falcons' "National Geordie Beard Day" eagerly waited next month, it appears that the Welsh have now jumped aboard the hairy bandwagon as the Ospreys are in on the act, signing up for the “Movember” campaign to cultivate the most stylish facial hair they can throughout November in aid of the Prostate Cancer Charity.
According to an Ospreys spokesman, "Gavin Henson is thought to be planning a goatee, Shane Williams a full set and Justin Marshall is trying for the Graham Mourie with a big moustache.”
I've been unable so far to locate photos of the team's efforts, so will have to content myself with the below "artist's impressions" with Henson in particular doing a more than passable impression of the Emperor Ming from Flash Gordon...