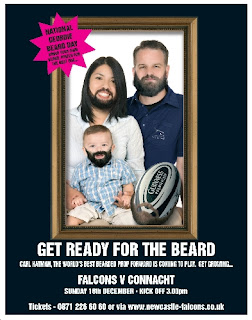 In continuation of this blog's current obsession with all things hairy, here's a brief update on the progress towards National Geordie Beard Day, being promoted by Newcastle Falcons to celebrate the arrival of Carl Hayman at the club and to benefit rugby charity Wooden Spoon.

, it appears that Director of Rugby John Fletcher is leading the way with an already mature growth.

“I’ve had three weeks growth so far and I’ve been told I am now irresistible to the opposite sex, even the same sex, so with another three weeks to go I’ll be twice as attractive by December 16," he says on the Falcons' website.

“I’ve also timed it quite well because after the National Geordie Beard Day I can look for some seasonal work in the big department stores around Newcastle in the run-up to Christmas."

The Falcons certainly don't believe in doing things by halves, as they've enlisted the services of bearded celebrity rummager David Bellamy and The Handlebar Club (who had winners in the frankly ludicrous World Beard and Moustache Championships, apparently held in Brighton this year) to judge the beard competition.

Of course the big question is will the clean cut visages of Messrs Wilkinson and Flood be sprouting facial fluff?
Posted by Total Flanker at 09:48