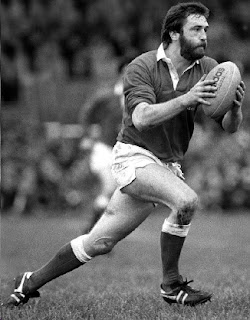 Very sad to hear the news today of the passing of Welsh legend Ray Gravell, who died of a suspected heart attack aged 56 while on a family holiday in Mallorca.
My memories of Ray Gravell are, I'm sorry to say, not happy ones as, with Phil Bennett and Steve Fenwick, he was part of the formidable Welsh midfield in the 1970s which, together with an electrifying back three of Gerald Davies, JJ Williams and JPR Williams, regularly made the lives of England rugby fans a misery. Although I wasn't really into rugby much back in the 70s, I did watch the big games on television and my recollections are very much of that lot running riot against a shambolic England every year.
It's astonishing, given that he was an integral part of the Welsh team from 1975 to 1982, that somehow he "only" amassed 23 caps - a sure indication that far fewer international rugby matches were played back then. However, with 2 Grand Slams to his name during that period he is already acknowledged as one of Wales' all time greats and he also earned 4 Lions caps, playing in every international on the 1980 tour to South Africa.
Great player, great character and from the tributes I've read it's clear that Ray will be sorely missed. My thoughts and sympathies go out to his family and his many friends...
Posted by Total Flanker at 11:55