Wales take on the World Champion Springboks this weekend and arguably will never have a better chance to beat them.

Of course, I say "World Champion" but the side Wales will face will be anything but that. Much is being made of the the fact that nine of the Boks' World Cup Final starting XV will play against Wales, but the fact is that, of the six missing, five were absolutely key to the way South Africa played in the Rugby World Cup and the other, Danie Roussow, pulled off the match-winning tackle on Mark Cueto in the Final.

Without Percy Montgomery's metronomic kicking, the game management skills of Butch James and Fourie Du Preez, the lineout prowess of Victor Matfield and the scrummaging strength of Os Du Randt, I sense that South Africa might be there for the taking, especially given that none of their players have been in action since 22nd October.
My question, however, is this. What on earth is the point of this game? What exactly will it prove? (OK, two questions). To stage an international match 33 days after the Final of the Rugby World Cup is just ridiculous and is a purely a greedy, money-grabbing exercise by the WRU. The match serves no other purpose and takes no account at all of player welfare.
Of course, it's not just the WRU who are indulging in such mercenary activities. The RFU are also in on the act, staging an even more meaningless encounter between the Boks and the Barbarians the following weekend. For that encounter the South Africans will also be shorn of their captain, John Smit, as his club, Clermont Auvergne, quite rightly insist that he turns out for them, whilst the Barbarians will feature the usual motley crew of retired internationals and holidaying antipodeans (Jerry Collins' Barnstaple socks notwithstanding), the English Premiership sides having (again quite rightly) refused to release their players for the meaningless encounter. 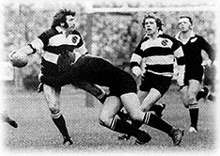 It's a far cry from the halcyon days of the seventies and in particular "that match", you know the one, 1973, the All Blacks, a match laced with meaning, a Barbarians team packed with Lions and, of course, "that try".
The professional era has, inevitably, seen a dramatic dilution of the lure of the BaaBaas - after all, no one can expect employers to release their assets for these one-off showcase matches and, in reality, no one can expect a scratch side coming together a matter of days before a game to put up a meaningful display against a well-drilled professional international outfit. This decline in the profile of the Barbarians has led to to calls that the grand old club should be laid to rest as an icon of rugby's amateur past rather than an anachronistic embarrassment of rugby's professional present but, I must say, I wouldn't go that far.
Yes, Barbarians' showcase matches against the Southern Hemisphere touring sides have become an utterly pointless exercise but, given the right support, the club can still find its niche in the game and make a real contribution. Last season, for instance, the BaaBaas played the Combined Services, the East Midlands, and the Army (in the Army Rugby's centenary celebration match), before undertaking summer fixtures on tour against Spain and Tunisia with a squad featuring various 2nd team players from Premiership and Celtic League clubs, National Division 1 players and a few guests from overseas.
Helping develop rugby in 2nd and 3rd tier nations, and supporting grassroots rugby and charitable causes are still areas in which the Barbarian club can bring its tradition and its magnificent brand to the table and really add something to the rugby calendar. Funding may be an issue (and probably explains why we've had to endure these meaningless showcase events over the years) but it should not be beyond the wit of professional rugby in the UK to find a way of supporting this worthy cause and help put something back into the game.
Posted by Total Flanker at 09:55