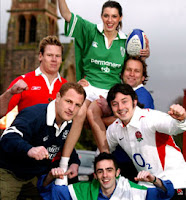 The shocks just keep registering on the richter scale as three more starting line-ups are unveiled for the opening Six Nations weekend.

It's often said that you don't know which French team will turn up for any particular match and this time that's quite literally the case. Marc Lievremont's first selection as head coach is bold, brave and gloriously bonkers in equal measures, featuring four players making their debuts including both props and the fly half, while 2 other members of the pack will win their 2nd and 3rd caps respectively.

The French selection may be eccentric in the extreme but I wouldn't necessarily bet against them beating Scotland, especially now that Frank Hadden appears to have had a sudden rush of blood to the head and has left out Chris Paterson from the Scotland starting line up. Yes, Scotland have decided to do without the best goalkicker in last year's Six Nations and the man who had a 100% success rate at the World Cup. This suggests that Scotland will seek to play a wider game against France which, frankly, could prove to be suicidal.

Meanwhile, no major shocks from Nick Mallet's Italy, as they continue to juggle their resources to come up with a long term successor to Diego Dominguez at fly half. Andrea Masi, a hugely talented footballer, gets his chance this time around which could signal a more rounded tactical approach, although the Italian pack still looks mightily fearsome and could just give Conservative Eddie more than a bit of a fright.

Flanker, what really sticks out to me in looking at the Italian line up is how many are playing with top flight clubs in France, England and Ireland. With so many Italian ruggers plying their trade on the other side of the Alps, I think we rugby fans should stop being so suprised when Italy dumps somebody. I bet they are salivating at playing England later this week.