No sharks in Kalamata Bay

Funny bloke Andy Ripley - one of life's eccentrics and something just so quintessentially English about him. 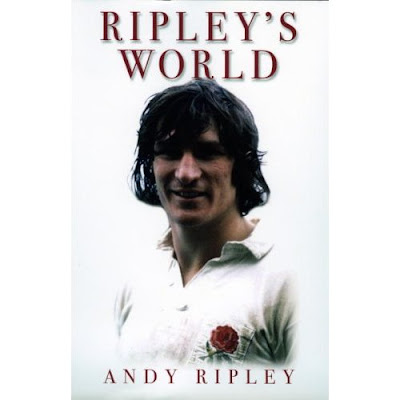 I've recently finished reading one of my Christmas presents - "Ripley's World" - for once not just another dull autobiography by a former international rugby player but, in fact, a remarkably honest account of Ripley's fight against prostate cancer.

The book is written in diary form, beginning in June 2005 when Ripley chronicles the events which led to his diagnosis. Taken to hospital with severe chest pain which turned out to be a pulmonary embolism (a blood clot that blocks an artery in the lungs), a routine PSA (prostate specific antigen) blood test revealed an off-the-scale score of 133 nanograms per millilitre (when anything over 3.5 for a man of his age would have been an indication of cancer).

In many ways it's typical of the man that his PSA score should have been so impressive - a superb athlete in his pomp in the 70s, he was one of England's standout players during an era of mediocrity but nevertheless finished on the winning team in away tests against South Africa and New Zealand in 1972 and 1973 and toured with the unbeaten British Lions in South Africa in 1974. He then went on to star in BBC's "Superstars", finishing second in the World Superstars event, before taking up rowing and holding his age group world indoor rowing records and competing for a place in the Cambridge University boat race crew when aged 50... all this whilst forging a successful financial career in the city.

All that should be enough to make you want to throw up with envy but to cap it all Ripley is a hugely engaging character and his book is a fascinating read. Yes, he reminisces about his past, sporting and otherwise, but it's far from dull and is set amongst an extremely candid account of the effect of his cancer upon himself and his family, the effect of his hormone therapy upon (amongst other things) his hair, his waistline, his athletic performance, his genitals, his libido and his state of mind (Ripley claiming to have found his feminine side).

That he decided to embrace his cancer, to own the disease and to fight it makes this an inspirational story and the fact that, with a PSA score of 0.1 ng/ml in April 2007 he appears to have the disease licked, makes it even more so.

My only issue is with the title of the book. Ripley wanted to call the book No Sharks in Kalamata Bay - a reference to an assurance he made to his daughter on a family holiday in Greece which sums up his optimistic approach to life and his cancer. But no, the publishers decided to call it Ripley's World: The Rugby Icon's Ultimate Victory Over Cancer because, according to Ripley, "there are probably still a few old blokes out there who vaguely remember" him.

Shame about the title, but I for one certainly do remember him and can only hope that if, God forbid, I'm ever faced with anything resembling what Ripley has been through this past couple of years, I can face it with the same bravery, stoicism and humour demonstrated in this excellent book.
Posted by Total Flanker at 10:01

As a guy, a nurse and a rugby fan, I gotta see if I can score this book on Amazon. Com in the States. Thanks, Flanker, for giving a shout out on this book!

PS-what do you make of this weekends coming H-Cup matches? There is a lot of intrigue to be played out.

i can hardly wait to see munster-Wasps. Those teams along with Clermont have played some really compelling matches in this group of death. i am sure clermont are shaking their heads at shooting themselves in the foot for their lack of discipline in the second half to let munster grab a point in Auvergerne.

Wow, your picks were 7/8-only Stade did not come through. I must confess that I was a little disappointed that Clermont did not make it to the quarterfinals. Barring injury, at this point, I think Munster is the team to beat. It's great to see some new teams like Saracens and Cardiff make it to the last 8.