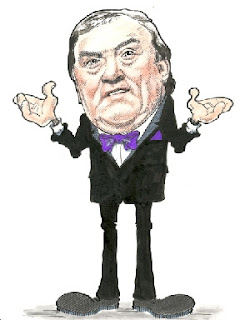 I'm not saying the mother-in-law's ugly, but last Christmas she stood under the mistletoe waiting for someone to kiss and she was still there at Lent.

I can always tell when the mother-in-law's coming to stay; the mice throw themselves on the traps.
The wife's mother said, "When you're dead, I'll dance in your grave." I said: "Good, I'm being buried at sea."
I took my mother-in-law to Madame Tussaud's Chamber of Horrors, and one of the attendants said, 'Keep her moving sir, we're stock-taking.'
Les Dawson - (1934-1993)
Boom, boom! Yes, there have been plenty of mother-in-law jokes doing the rounds at northern working men's clubs over the years, but how many international rugby players can claim that their wife's mother is truly a few french fries short of a happy meal?
Well, Ben Cohen for one.
According to the Daily Mail (whose insightful investigative reporting has struck gold once more) Cohen's mother-in-law, Felicity Blayney, has been "driven to despair" by the behaviour of Cohen and her daughter Abby which has, she claims, resulted in her being barred from seeing her twin granddaughters.
Twice-divorced (I wonder why?) Mrs Blayney claims that when she stayed with the couple in Northants shortly after the birth of the twins she was banned from using both the landline and her mobile after 10.30pm, and says she was not allowed to watch television or wear high heels in the house and was expected to do all the cooking, cleaning and ironing.

"One Sunday Ben didn't let me leave the house until I'd tided up my paperwork, tidied my bedroom and cleaned the floors. I felt like Cinderella," she told the Mail's ace reporter, adding (somewhat bizarrely):

"Ben is gorgeous and deep down there is a lovely person there."

Apparently, although not altogether unsurprisingly, the couple, who now live in France where Cohen now plays for Brive, are refusing to return her phone calls.

A rather bemused Cohen is reported to have said: "This has come totally out of the blue. Felicity is welcome to see the children any time she likes. I think Ryanair flights cost about £1, but if money is an issue I am happy to pay costs. I don't know what else to say."

Other than "my mother-in-law is clearly as mad as a box of snakes," perhaps?
Posted by Total Flanker at 16:45

I just found your blog through google...it's awesome! I've only been in three rugby practices so far...not even the real thing. I'm completely new and came in as a sub for someone else...but I really love the game. Technically I'm a 'flanker' but the only thing I've gotten to do so far is get lifted in the lineouts as a jumper because I'm the smallest. (108 lbs, it's a coed team.)

What's a good way to get into the action more? Any books/videos you'd recommend to improve my range? I only get a limited amount of any real 'play' time. Thanks a lot!

Many thanks for your comment and welcome not only to the blog but also to a fantastic sport.

Right now the best you can do is to keep turning up at your team practices and absorb as much information as you can from the coaches and your team mates. Also watch as many games as possible - both live and on TV- preferably sitting next to an experienced player/coach/referee so that you can bug them with questions. I'd steer clear of books and videos for the time being as they're often confusing and can lead to information overload.

I must warn you though, once bitten by the bug you'll be infected for life!

For a more tongue in cheek guide to the various positions in rugby (still work i progress) please take a look at
http://totalflanker.blogspot.com/search/label/positions

Thanks a lot! I appreciate the great info, and keep having fun out there. :)