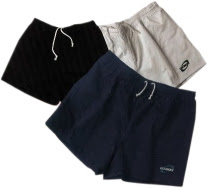 1. News has emerged today that Scotland forward Scott MacLeod has been cleared of failing a doping test after taking asthma medicine without permission. MacLeod had tested positive for Terbutaline but a statement released by Scottish Rugby today said: "The judicial committee accepted that MacLeod's use of the drug was not intended to enhance performance." What they probably meant to say was that, having watched Scotland play, they could detect no evidence of performance being enhanced :).

2. A number of pundits are suggesting that Marc Lievremont's condemnation of Ronnie Regan as a "grosteque clown" was some kind of vindication of the hooker's role in successfully winding up the French in a Mooresque fashion, but this ignores just how poorly Regan played, includng him giving away 3 points after throwing punches right in front of the referee. Time for Brian Ashton to pension off the stroppy Bristolian.
3. Another ELV rant: under the laws being trialled down under the deliberate infringments at scrum time by the French props against England would have yielded no more than free kicks - hardly a discouragement for a prop intent on illegally disrupting the scrummage. Non?
4. Before turning in last night I flicked through the channels to discover something called "Premiership Rugby Highlights" on BBC2, rather helpfully starting at midnight. Fifteen minutes later I'd given up. Saracens v Harlequins looked an interesting enough game but the BBC's coverage was all over the place - the most bizarre bit being twice shown a slow motion replay of the Quins number 8 spilling the ball in a tackle on halfway. Were there really so few highlights?
Posted by Total Flanker at 14:18

Wow, I have to admit even I was amazed at the amount of sour grapes that Lievremont was spewing after France-England. Maybe if French backs could hold onto the ball when they are tackled in their own territory, they would not be gifting England points. The opening try in the match was an amazing bit of deja` vu from how England blitzed France right away in the semi finals.